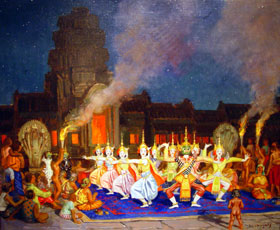 The Khmer Dances at Angkor-Vat by Jean Despujols, Oil on Canvas, from the Meadows Museum of Art at Centenary College Collection

The exhibition is part of the Louisiana Collects series and has been funded by Kilpatrick Life Insurance Co., Jolie and Robert Shelton of Lafayette, the Louisiana Endowment for the Humanities, the Community Foundation of Shreveport-Bossier, the Centenary Muses and the Friends of the Algur Meadows Museum. It presents 32 Despujols works in a new light by combining paintings, drawings and photographs from the first third of the artist's travels through Cambodia and Vietnam with a half dozen period costumes and individual textiles worn by the minority peoples depicted by Despujols in the works.

Living somewhat separately from the dominant ethnic Vietnamese, there are 53 minority groups that represent 1.5 percent of the total population. The non-Chinese minority peoples are for the most part highlanders who live in relative independence, follow traditional culture-specific customs and are distinguished from each another by language, religious practices and architectural styles, as well as dress and personal ornaments. These groups are either sedentary or nomadic, with the majority engaged in sedentary cultivation of wet rice and industrial crops. Despujols was determined to investigate the remote regions where minority peoples lived and portraits featured in this exhibition depict Khmer, Cham, Rade, Mnong and Hre minority peoples in their traditional, hand-woven and dyed costumes with the great accuracy typical of French Academic style. 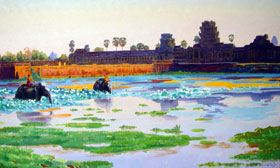 The Same at the Rising Sun, Angkor Region, Oil on Canvas by Jean Despujols, from the Meadows Museum of Art at Centenary Collection

The organization of this exhibition has taken six years and has come to fruition through a group effort. Dr. Michael Howard, professor of anthropology at Simon Fraser University in Canada and a field expert dedicated to the collection and preservation of Indochinese culture with a focus on textiles, visited Shreveport to select artworks for the exhibition. He was accompanied by Dale Gluckman, former curator of textiles at the Los Angeles County Museum of Art. Based on the importance of the textiles and costumes depicted, Dr. Howard and Ms. Gluckman worked together over a four-day period to select Despujols' works to be included in the exhibition. Following this selection, Dr. Howard began the process of collecting costumes and textile samples while doing fieldwork in Southeast Asia.

As part of the organization process, the staff of the Meadows Museum of Art began documenting and accessioning the textiles as they were shipped to Shreveport by Dr. Howard. Once the textiles had been documented and accessioned, the design of the exhibition began. Special archival mannequins were purchased to display the costumes and textiles. Photographs taken by Despujols while on his journey were loaned to the museum by Dr. Dana Kress, professor of French at Centenary. Framing of the photographs was begun as part of preparation for the exhibition that features the minority peoples Despujols encountered.

Of great importance, this exhibition also celebrates the nascence of the Meadows Museum of Art, which was originally founded to house the Despujols collection of French Academic works depicting Indochina. A second exhibition, focused solely on Cambodia, is "Louisiana Collects: Jean Despujols in Cambodia," which will be on display Feb. 11-March 2 in the museum's upstairs gallery.

A calendar of events and programs has been developed in tandem with both exhibitions. Both are open free of charge to the general public. For further information, the public is encouraged to call the Meadows Museum of Art at 318-869-5040.

This exhibition has been organized by the staff of the Meadows Museum of Art at Centenary College of Louisiana in cooperation with Dr. Michael Howard, professor of anthropology at Simon Fraser University in Canada, and Dale Gluckman, former curator of textiles at the Los Angeles County Museum of Art. The printing of educational and informational materials for this exhibition and for implementation of educational programs has been supported by the Louisiana Endowment for the Humanities, a state affiliate of the National Endowment for the Humanities, the Community Foundation of Shreveport-Bossier, and by the Shreveport-Bossier Convention and Tourist Bureau. The Meadows Museum of Art gratefully acknowledges special assistance from Kilpatrick Life Insurance Co., Jolie and Robert Shelton of Lafayette, the Centenary Muses and the Friends of the Algur Meadows Museum for making this exhibition possible. The Museum receives general operating support from the Shreveport Regional Arts Council with funds from the City of Shreveport. The Museum receives annual support from the Friends of the Algur Meadows Museum. The Museum seeks and receives funding and support from both public and private foundations and other sources on a project-by-project basis.