Countdown to Carnegie Hall: Centenary Camerata Departs Thursday for Sunday Performance at One of World's Most Prestigious Venues

Update: see pictures from this event. 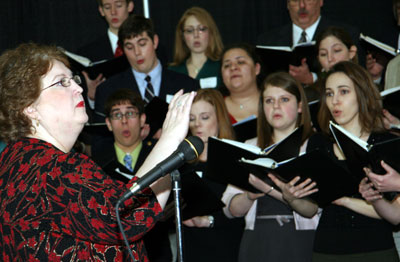 SHREVEPORT, LA — Fifty-three members of the Camerata vocal ensemble from Centenary College of Louisiana will depart Thursday morning for the trip of a lifetime for college voice students. They will head to the Big Apple to prepare for an invited performance Sunday evening at Carnegie Hall, one of the most prestigious venues in the world.

Camerata will sing along with other selected college and church choirs and professional performers as part of Carnegie's Masterworks Series and will also sing solo, a special tribute to the singers' abilities. Their conductor, Dr. Julia Thorn, has also been honored with an invitation to conduct alongside renowned conductor Paul Oakley. Camerata received the invitation "based on its high level of performance and accomplishments," organizers of the event said.

"Very few choirs are invited to present solo performances in one of the most prestigious concert venues in the world, so this is a tremendous honor," Thorn said. "Camerata definitely deserves this mark of distinction. The students' musicianship and choral skills have earned them this privilege, and we're thrilled."

After Thorn submitted a CD sampler, Camerata was selected to not only join the mass choir for the Durufle Requiem, but also to have a solo performance as a part of the Debut Series during the Masterworks Festival weekend. Camerata will be accompanied by pianist Gay Grosz, who is a lecturer in music at Centenary.

The ensemble will be in New York until Monday, with the Carnegie performance set for 8:30 p.m. on Sunday. The students will rehearse during four-hour-minimum blocks daily but will have some free time to see the city. After the performance Sunday evening they will be treated to a dinner and dancing cruise around Manhattan, courtesy of Manhattan Concert Productions.

Camerata members who will be performing at Carnegie Hall, by states and hometowns, are: