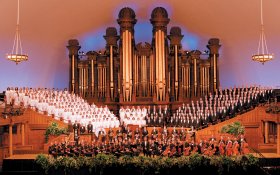 "Inside the Mormon Tabernacle Choir" will be his topic at 11 a.m. Thursday, March 1 in Brown Chapel. "Life with the Mormon Tabernacle Choir" will be the subject of his Attaway Series lecture from 7:30 to 9 p.m. Friday, March 2 in Kilpatrick Auditorium of the Smith Building. Both events are free and open to the public and will also feature singers from the Centenary College Choir, Camerata and Chorale ensembles.

While in Shreveport, Wilberg will also consult privately with Centenary vocal ensembles and music classes and will present a conducting workshop and a service at the First United Methodist Church of Shreveport. His local appearance is sponsored by the Attaway Lecture Series at Centenary, First United Methodist Church and The Church of Jesus Christ of Latter Day Saints and Centenary Convocations Committee.

Wilberg was appointed associate music director of the Mormon Tabernacle Choir and music director of the Temple Square Chorale for The Church of Jesus Christ of Latter-day Saints in May 1999. He is a former professor of music at Brigham Young University and is active as a composer, arranger, guest conductor and clinician throughout the United States and abroad.

His compositions and arrangements are performed and recorded by choral organizations throughout the world. In addition to the many compositions he has written for the Mormon Tabernacle Choir, his works have most recently been performed by such artists as Renée Fleming, Frederica von Stade, Bryn Terfel, the King's Singers, Audra McDonald, and narrators Walter Cronkite and Claire Bloom.

Wilberg received his bachelor's degree from Brigham Young University and his master's and doctoral degrees from the University of Southern California.

During his Centenary lectures he will share his experiences as he has traveled around the world with the Mormon Tabernacle Choir over the past seven years. The Choir has appeared at 13 of the world's fairs and expositions, performed at the inaugurations of five U.S. presidents and sung for numerous worldwide telecasts and special events.

Ronald Reagan dubbed the choir "America's Choir." After listening to the Choir at his 1989 inauguration, President George H. W. Bush proclaimed it "a national treasure." Eugene Ormandy, renowned conductor of the Philadelphia Philharmonic Orchestra, called it "the world's greatest choir." Five of the Choir's recordings have achieved "gold record" and two have achieved "platinum record" status. The most popular was the Grammy-Award-winning 1959 release of "The Battle Hymn of the Republic" with the Philadelphia Orchestra.