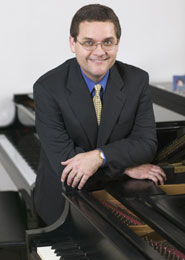 SHREVEPORT, LA — Acclaimed pianist Willis Delony of Louisiana State University in Baton Rouge, will present a guest recital at 8 p.m. Monday, March 19 at Centenary College. The program, free and open to the public, will be held in the Anderson Auditorium of the Hurley Music Building.

Delony has won national and international acclaim as a jazz and classical pianist, conductor, chamber player, commercial composer and arranger. His concert explorations of the jazz and classical piano worlds have been showcased in a recording entitled, A New World A' Comin' — Classical and Jazz Connections, which was released on the Centaur label. In a review published by Fanfare magazine, Peter Burwasser writes: "(Delony) plays with gusto and finesse, and with an especially nimble rhythmic sensibility, a proper combination of attributes for jazz, or any other kind of music-making, for that matter."

Previous album credits include a recording of sonatas by Samuel Barber and Sergei Prokofiev, also on the Centaur label, and a jazz album, Civilized Conversations, featuring Delony and bassist Bill Grimes. He is featured in a collaboration with bassoonist William Ludwig on the recent recording, Rhapsody in Bassoon, on the Mark Records label, which features the world premiere recording of André Previn's Sonata for Bassoon and Piano. Most recently, he recorded piano music by Joseph Makholm, David Baker, Bill Dobbins and John Lewis for an album titled Odds Against Tomorrow — Classical and Jazz Connections II, to be released by Centaur records.

He has appeared recently as guest soloist with the Columbus (Georgia) Symphony, Orlando Philharmonic, Toledo Symphony, the Baton Rouge Symphony, the Louisiana Sinfonietta and, in a 2002 trip to China, the Shanghai Symphony. In July 2006 he performed a solo recital in Offenburg, Germany as part of the Kreuzgangkonzerte series, performing a special program entitled Jazz Meets Mozart. In November 2006 he traveled to Paris for an appearance both as solo recitalist on the La Main d'Or concert series, and also for a jazz trio engagement at Le Sept Lezards, a popular Parisian jazz club.

Delony is an experienced jazz arranger whose scores have been performed by orchestras and big bands throughout the U.S. and Canada. His work as pianist, arranger and conductor is currently featured in Club Swing and Stay Tuned, the popular orchestral shows featuring the Minneapolis-based vocal group Five By Design. He performed as conductor/pianist on the CD recording of Club Swing, released in January 2002.

Delony is the Barineau Professor of leyboard studies and professor of jazz studies at LSU. Prior to his LSU appointment in August of 2000, he taught for 14 years on the music faculty at Southeastern Louisiana University, where he received the university's President's Award for Excellence in Artistic Activity. He is also the recipient of an Artist Fellowship by the Louisiana Division of the Arts in recognition of his achievements in classical and jazz performance.