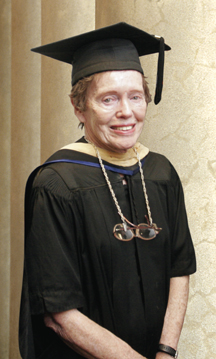 Betty McKnight Speairs, Professor Emerita of Mathematics, wears the 80-year-old master's robe that once belonged to legendary Centenary biology professor Mary Warters. Speairs has worn the robe to some 37 of the 60 annual commencements in which she has marched with the faculty in academic procession. (May 2006 Photo, Centenary News Service) 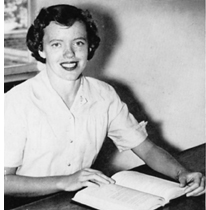 SHREVEPORT, LA — Is there any professor anywhere who has marched in a college's annual commencement procession for 60 consecutive years with nary an absence? There's at least one. She's Betty McKnight Speairs, professor emerita at Centenary College of Louisiana.

On Saturday, May 5, 2007, the sprightly 82-year-old will march in Centenary's academic procession for the 60th time since she joined the faculty at age 22 and tackled math classes teeming with returning World War II veterans.

"Centenary has been my life and I have always wanted to participate and be involved," Speairs said with a smile. She's especially honored at this year's turn of events at commencement since Centenary will award her an honorary doctorate.

"I was flabbergasted," she said. "(As a faculty member) I had voted on honorary doctorates for years and we never voted on one like this."

Though often called "Dr." over the years, Speairs corrected that notion whenever possible. "I'm just Mrs. I don't have a doctorate," she would point out.

Actually, she had originally planned on teaching high school and indeed had done only student teaching when she completed her master's degree at Southern Methodist University. But returning soldiers, sailors and the G.I. Bill brought demands for professors as Centenary's enrollment doubled and the young Miss McKnight joined the faculty.

"I had no teaching experience, got tenure in three years and was promoted to full professor without a doctorate," she recalls. "I've had many surprises and many blessings over the years."

The honorary doctorate is the latest surprise in an extraordinary career, which included Speairs's receipt of the Outstanding Teacher Award in 1981 and her designation as Honorary Alumna in 1978.

Upon her retirement in 1987 after 40 years, Centenary's magazine said: "Her rapport with students, her willingness and eagerness to volunteer for special projects and her interest in everything that had to do with Centenary College past, present and future has endeared Mrs. Speairs to the entire Centenary family."
The article also described her as "a 5-foot-2, 62-year-old strawberry blonde ...who doesn't look much different from the day she started teaching at Centenary."

Indeed her health was an amazing thing as well. She never missed a day of class due to illness in all her 40 years and, unless she was at a conference, never missed a single one of the compulsory chapel services held at the United Methodist institution every week until they were discontinued in the 1970s. "I was sick once, but it was in the summer and I wasn't teaching," Speairs recalled.

Seems that Betty McKnight Speairs is just tailor made for the saying: "They just don't make 'em like that any more."