Find out about the current search for a new
president to take over upon Dr. Schwab's retirement. 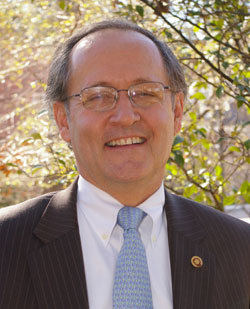 Dr. Schwab has served as President for the past 18 years, and was appointed the 28 th President of the College in 1991. He is also a tenured professor at Centenary.

(Click HERE to read coverage from the Shreveport Times)

The decision to retire is timely, said Dr. Schwab, with the conclusion of the centennial year in Shreveport, the success of the initial phase of the comprehensive campaign, and the solid leadership from the experienced and newly appointed Board of Trustees. On a personal note, he said that it is an appropriate time to retire as he begins a new chapter in his life with his wife Kathy, and as he celebrates his 62nd birthday.

"It really is with mixed emotions that I make this announcement," said Schwab. "The 18 years I have served as President of this grand old institution have been extremely rewarding. We can be proud of our many accomplishments over these years. My love for my Centenary friends will always remain deep and strong."

President Schwab will serve until a new president has been named, at which time he will be on a sabbatical before he returns to the College as a faculty member. "It has always been my desire to conclude my career in higher education by serving as a member of the faculty at Centenary College."

According to Dr. Schwab, a search committee will be chaired by Dr. John George, Secretary of the Board of Trustees, to select his successor.