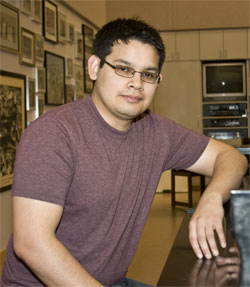 A junior piano major, Reyes' winning performance was Grieg's Concerto in A minor. For capturing first place in the competition, Reyes will have the opportunity to perform with the Monroe Symphony during their 2009-2010 season, and collected a cash prize.

Reyes is also the current winner of the Hurley School of Music's Concerto and Aria competition. He will perform the first movement of the Grieg concerto with the Hurley Chamber Orchestra on February 10, 2009. He was named Outstanding Jazz Performer in 2006 at Texas A & M University's Kingsville Summer Camp. As a percussionist, he is a member of the Louisiana Intercollegiate Band and the National Honor Band. Reyes is also accompanist for the Centenary College Choir.

A native of Brownsville, Texas, Reyes studies with Gay Grosz, who is Collaborative Artist in Residence at Centenary College.