Out of the Car and Into the Green Rough 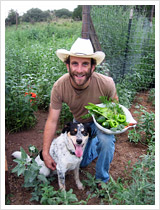 Shreveport, La. — Adventure journalist and NPR contributor Doug Fine will present a funny and engaging talk and slide-show about his efforts to live carbon neutral on his ranch in southern New Mexico, Thursday, March 12 beginning at 7 p.m. in the Whited Room of Bynum Commons. The event is free and open to the public.

At age 36, Fine decided "to see if a regular guy who enjoyed his comforts could maintain them with a reduced oil footprint," and bought a parcel of land, dubbed it the Funky Butte Ranch and dug right into his greener lifestyle. During this presentation, Fine demonstrates with humor and perseverance the hard-won benefits of his new lifestyle in rural New Mexico. 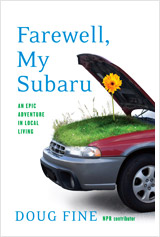 Fine started with four simple goals: to use a lot less oil, to power his life with renewable energy, to eat as locally as possible and to not get killed in the process. In this memoir, Farewell, My Subaru, Fine shares his mishaps and lessons learned during his yearlong trek to turn his newly bought New Mexico ranch into a green and sustainable environment with as little carbon fuel as possible. From using two very lovable goats for his organic food production to transitioning into a biofuel engine for his truck and even installing solar panels, Fine balances the troubling decisions Americans must consider while also revealing a host of unexpected benefits.

An adventure journalist, Fine has logged time as a reporter in such places as Rwanda, Burma, Laos, Guatemala and Tajikistan. His first book, Not Really an Alaskan Mountain Man, documents a year roughing it in the wilds of Alaska. He is also a regular contributor to NPR, and has written for U.S. News and World Report, the Washington Post, Salon, Sierra, Wired and Outside magazine.

For more information about the event, contact Jeanne Hamming Assistant Professor of English at 318.869.5082.