The Odyssey of Jean Despujols Concludes at Meadows Museum

SHREVEPORT, La. — The final of three portions of Jean Despujols' journey through Indochina will be on display beginning March 1 through June 21 at the Meadow Museum of Art at Centenary College.

At the conclusion of the exhibit, three collections, consisting of 98 pieces, will travel to Hanoi, Bangkok and possibly Hawaii, according to Diane Dufilho, Director of the Museum. 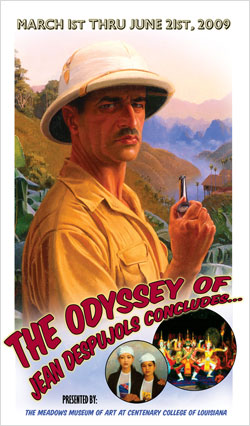 The paintings, drawings and documentary photographs depict the minority people of Vietnam, Cambodia and Laos created by Jean Despujols during his travels through Southeast Asia from 1936 through 1938. In this third phase of his journey, the exhibition will focus in great detail on the textiles, including the traditional dress and newly acquired costumes.

In May of 1936 Jean Despujols was selected for a special assignment to the Far East to meet the request of the Grand Conseil Economique of French Indochina. For this assignment, he was commissioned to travel through the Indochinese states to record on canvas and paper the land, the peoples and their ways of life before time and western influences altered them forever. Despujols, a fifty-year-old professor at the American Academy of Fine Arts at Fontainebleau, held the Premier Grand Prix de Rome and the Medaille d'Or de Salon des Artistes Francais. He was also the recent winner of the Grand Conseil Economique's Indochina Prize for Painting, and it was felt, was ideally suited for this demanding mission both by training and temperament.

For 20 months, Despujols traveled through Indochina, generally avoiding the cosmopolitan areas. Instead, Despujols penetrated the most remote sections of the land and recorded what he saw with intelligence and appreciation. Upon completion of the assignment in 1938, Despujols mounted an exhibition of his works in Hanoi and Saigon. The resulting collection of landscapes and portraits was eventually purchased by Algur H. Meadows and presented to Centenary College at Shreveport. In 1975 the Meadows Museum of Art was established for the purpose of housing the Jean Despujols Collection of Paintings and Drawings of Indochina, consisting of 360 works in oil, watercolors and pencil sketches.

Events are planned as part of the conclusion of Despujols' journey. They include:

About Meadows Museum of Art