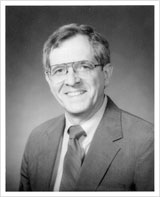 SHREVEPORT, La.—AsherXino Corporation announced today that its Board of Directors has appointed Jack M. Webb '57 as the Vice Chairman of the Board of the Company.

Webb graduated with a Bachelor of Science Degree in Geology from Centenary College in 1957 prior to service as a Captain in the U.S. Army tank corp. He received a Doctor of Jurisprudence from Tulane University and in 1999, attended the John F. Kennedy School of Government at Harvard University.

"We are very pleased to have Jack accept to be the Vice Chairman of our Board," said Chris Wilmot, AsherXino's Chairman. "His skills, experience and contacts make a strong fit with AsherXino's international growth and expansion ambitions."

Webb is an attorney and founder and CEO of Jack Webb and Associates, a prominent Houston-based workout company. He has held several executive banking and energy industry positions including Shell Corporation. He serves on numerous boards and advisory committees, including Chairman of the Board and Senior Fellow of the American Leadership Forum (ALF), member of the Export-Import Bank of the United States (Ex-Im Bank) and Techax Ventures. He has received five appointments from various presidents of the United States, including an Executive Committee Member of the Council for National Policy 1984-1985, the President's Commission on White House Scholars, the Advisory Board of the U.S. Peace Corps, and Presidential Delegation assignments to Finland, Haiti, Ghana, Angola and Bolivia.

AsherXino Corporation is a Houston Texas based oil and gas company, established by a group of experienced industry professionals with the aim to acquire, explore, assess and exploit oil and gas deposits in prospective tenements across the Gulf of Guinea, with the longer term objective to build an asset base, with principal focus on the oil prolific basins in the Gulf of Guinea - Nigeria, Ghana, Cote D'Ivoire, Libya and Uganda.