SHREVEPORT, La. — The Hurley School of Music at Centenary College will present a Contemporary Cello Recital, Tuesday, March 17 beginning at 7:30 p.m. in the Anderson Auditorium.

"Contemporary Works for Solo Cello: Louisiana Connections" will feature musical pieces that were premiered in Louisiana, were written by professors and/or upper-level graduates of Louisiana universities/colleges, or that have been previously played at music festivals in the state. 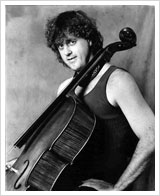 Guest cellist Craig Hultgren will perform selections that include:

This program of non-traditional works for solo cello includes a work for cello and fixed media and also a piece for amplified cello. The concert promises to be refreshing and unique!

Known in Birmingham, Ala., as the Cello guy, Craig Hultgren

Hultgren has solo CD recordings on Minnesota-based Innova Recordings and Contemplative Outreach Birmingham. His third solo recording, The Electro-Acoustic Cello Book, featuring new music for cello and electronics was released on Living Artist Recordings. In the last decade, the Alabama State Council on the Arts has awarded him two individual Artist Fellowships. He is a member of Thamyris, a contemporary chamber music ensemble in Atlanta, the Chagall Trio, a piano trio in Birmingham, and Luna Nova, the ensemble of the Associated Colleges of the South.

As a traditionally trained artist, Hultgren possesses music degrees in performance from the University of Iowa where he was graduated with distinction and honors and from Indiana University, the world's largest school of music. He plays in the Alabama Symphony and has served as principal cellist with the National Symphony Orchestra of Panama. He teaches at Birmingham-Southern College, the University of Alabama at Birmingham and the Alabama School of Fine Arts. Hultgren also works in the behalf of arts as an organizer. He founded Birmingham Improv the annual festival of improvisatory arts.

Currently, Hultgren is Chair of the Board of Directors of the Metropolitan Youth Orchestras of Central Alabama. He is a founding member and former President of the Birmingham Art Music Alliance, a composer's organization. For ten years, he produced the Hultgren Solo Cello Works Biennial, a competition for living composers of solo cello works where he played the same program of finalists in Birmingham, Atlanta and Tuscaloosa. The audience votes to choose a winner in each venue.

For more information on these special musical events, contact Candy Maynard at 318.869.5235.