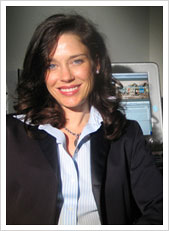 SHREVEPORT, La.— Filmmaker and story teller Celia Carey will headline two events on the College campus, Thursday, April 2 when she will present a lecture to the college community, and introduce and screen one of her award-winning documentaries as part of the Centenary College Attaway Fellows in Civic Culture program. All presentations are free and open to the public.

Carey will present a lecture, "The Celluloid Ceiling and Other Lessons" at 11:10 a.m. in the Whited Room of Bynum Commons. During the lecture, Carey will discuss the experiences she has had and the lessons learned as a woman working as a filmmaker in what is still a predominately male profession. Her experiences are telling and enlightening to those interested in issues of diversity and gender in the workplace, or those interested pursuing a career in filmmaking.

Later that evening, she will introduce and screen her award-winning film, "The Quilt makers of Gee's Bend," beginning at 7 p.m. in the Whited Room. This acclaimed PBS film documents a group of African-American artists from Gee's Bend, Ala. The artists, primarily women, are descended from slaves and still inhabit the land their forefathers once worked. Their artwork, in the form of quilts, has been hailed by Michael Kimmelman of "The New York Times" as "...some of the most miraculous works of modern art America has produced" and is compared to the great artistic enclaves of the Italian Renaissance. The film explores the extraordinary lives, inspirations, and history of the quiltmakers, and follows them on a poignant and journey to see their work exhibited in a major art museum.

Carey developed her storytelling skills in New York City, where she received her M.S. from Columbia University's Graduate School of Journalism. After 13 years of working on films around the world for National Geographic, Discovery, the BBC, and other major broadcasters, she returned to her Alabama roots to focus on stories about Southern history and culture.

In the last four years her films have received nine Emmy nominations and five Emmy Awards, including: three Emmy awards for projects that she directed and produced, and two Emmys for films that she executive-produced.