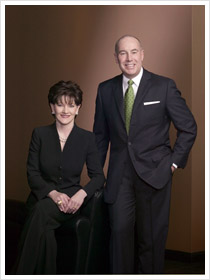 SHREVEPORT, La.—An alumnus from Centenary College of Louisiana and his wife will be honored for bringing attention to the importance of spiritual care to cancer survivors during the 15th Annual Loving Hearts Caring Hands awards dinner in Houston, April 30.

Jess Moore '79 and his wife Beth Sanders Moore will receive the 2009 award during the event benefiting the Department of Chaplaincy and the Pastoral Education at the University of Texas M.D. Anderson Cancer Center. The Moore's are the youngest recipients to be honored and receive the award.

The event recognizes M.D. Anderson's 24-hour in-house spiritual support program, and celebrates the department's more than 500,000 pastoral visits to patients, caregivers and employees during the past three decades.

Jess Moore surprised his wife at a ceremony in which M. D. Anderson announced the creation of the Beth Sanders Moore Young Breast Cancer Survivors Program, while also announcing that its undiagnosed breast clinic would be named the "Beth Sanders Moore Undiagnosed Breast Clinic" as a tribute to her courage in fighting the disease and longstanding efforts to educate others.

Beth learned she had breast cancer through the undiagnosed breast clinic just days before her 46th birthday. As a daughter of a breast cancer survivor, she was an advocate for breast cancer education and research long before her diagnosis, having served as director of development for the Susan G. Komen Breast Cancer Foundation's national headquarters in Dallas early in her professional career

After moving to Houston, on a volunteer capacity, she served on the board of the Komen Foundation's Houston Chapter and later as its president. Beth spearheaded the campaign to fund M. D. Anderson's first mobil mammography van which provides low-cost mammograms to underserved populations in Houston. She is a member of the executive committee of M. D. Anderson's advisory board, the Board of Visitors, and serves on the advisory board of the M. D. Anderson's Blanton-Davis Ovarian Cancer Research Program, as well as the advisory councils of Susan G. Komen For the Cure and Pink Ribbons Project.