SHREVEPORT, La. —Students from Centenary College have been traveling cross country recently presenting their student research projects on subjects ranging from economics to chemistry. They have made stops in Chicago, Albuquerque, Dallas, Salt Lake City and Memphis.

John Hafer, a senior Finance and Economics major, and Dr. Helen Sikes, Professor of Accounting and Finance in the Frost School of Business, presented a paper entitled "Executive Participation in Fraudulent Financial Reporting: The Behavioral Influence of Options in the Compensation Package" to the Midwest Finance Association's Conference in Chicago, March 2-4. The study identifies the significant predictive power of options in the structure of executive compensation when used to deter corporate officers from participating in and promoting the illegal behaviors of insider trading and fraudulent financial reporting.

Hafer is also presenting a paper in Albuquerque, N.M. later this month at the annual meetings of the Western Social Science Association. His paper is entitled "The Predictive Ability of the List of the Top 100 Blue Chip High School Football Players: A Preliminary Examination of their Impact on College Football." He is working primarily under the direction of Dr. Harold Christensen, Professor of Economics with econometric advice from Dr. Elizabeth Rankin, Professor of Economics.

Quinn Larwood, a junior Economics major, traveled to the Economic Scholars' Program for Undergraduate Research at the Dallas Federal Reserve Bank with Dr. Rankin and Dr. Christensen on March 27. The conference was a one-day undergraduate economics research conference cosponsored by Austin College and the Federal Reserve Bank of Dallas and provided students the opportunity to share and gain feedback on their original research. Larwood served as a discussant this year in hopes of presenting his Honors project at the conference next year. Other students that attended the conference were from institutions such as Austin College, Southwestern University, Furman, the University of Dallas, Macalester College, and Baylor University. 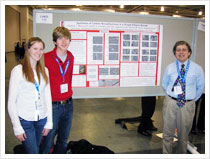 Nine students traveled to Salt Lake City in late March where they presented papers at the American Chemical Society National Meeting and Exposition. The event attracted more than 10,000 chemists, chemical engineers, professors, undergraduate and graduate students, and other related professionals. "What is interesting to note is that these nine students that attended this conference represent 1 percent of our College student body, a claim that few institutions can claim," said Dr. Tom Ticich, Chair of the Chemistry Department.

Jessica Garza, senior biophysics major, and James Nolan, a senior physics major presented a poster on "Structural Characterization of Ligand-Bound Glucose/ Galactose Binding Protein." They are both working under the direction of Dr. Troy Messina, Assistant Professor of Physics.

Cara Miccoli, junior biochemistry major, presented "Synthesis of beta-ketoesters via reactions catalyzed by quinine derivatives," while junior neuroscience major Andy Osborn presented "Employing azaferrocene catalysts in the ketene-Claisen condensation of beta-ketoesters." Both worked under the guidance of Dr. Mary Robert Garrett, Assistant Professor of Chemistry. Miccoli also presented a poster on the Centenary College chemistry club, and accepted an Honorable Mention award the chemistry club received based on their activities.

Sophomore Matthew Blanchard and Lauren Gernand, senior chemistry major, presented a poster on "Simple flame synthesis of carbon nanostructures for the high school or college laboratory." Both are students of Dr. Tom Ticich, Grayson Chair of Chemistry and Chair of the Chemistry Department.