SHREVEPORT, La. — President Kenneth L. Schwab was recently announced as the 100th member of the William G. Anderson Society during the Senior Jubilee on April 23. The WGA Society is a community of students, alumni, family of alumni, faculty, staff, and friends who seek to maintain the high value of a Centenary degree through their promise to give annually, as they are able, for the rest of their lives.

During his retirement reception, Nicole Clifton-Chair of the WGA Society presented Dr. Schwab with his certificate of membership, logo T-shirt, and the society's fleur de lis window cling. The Senior Class of 2009, in just a short period of time, has garnered a 33% commitment rate from their peers and will continue as Alumni to solicit from their classmates, lifetime support of Centenary College through this leadership society. 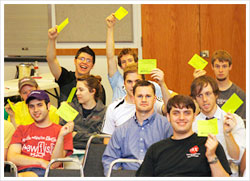 During a separate meeting, WGA Society members, Nicole Clifton and Emma Cook, Class of 2009, presented their vision to the Rising Seniors at a noon lunch meeting on April 30. To date, the Rising Senior class has 24 members and is currently nominating their officers to take the helm for the upcoming Class of 2010.

It is the goal that the William G. Anderson Society begun with the Class of 2009 will grow to 100% membership of all graduating seniors by the year 2013. Following in the tradition of the society's namesake, current Chairman of the Board, William G. Anderson, each member seeks to contribute to the future of the College by doing their part to support its mission.

The Office of Development is proud of this class and of their tireless efforts to develop a support system that will appeal to all of the Centenary community. For more information on the WGA Society, call 318.869.5599.