SHREVEPORT, La.—Friends, family, faculty, staff and members of the community gathered here at the College to honor the latest graduating class May 9 when Centenary College awarded bachelor's and master degrees to 186 students during the annual commencement exercise at the Gold Dome.

"I am proud to see how far the College has come in the brief 18 years that I've been here. I remember my first commencement ceremony in this Dome; now I get to celebrate the end of my tenure with you, the accomplished women and men whom we honor today," said Dr. Ken Schwab, President of the College. "When I realized that next years entering first year students were born in 1991, the year I came to Centenary as President, I decided that could be a sign it was time to retire! So I leave the College in your capable hands, honored to finish my presidency with the distinguished Class of 2009."

Each student, according to Dr. Schwab, could not have accomplished the feat of graduating alone, stating that they were surrounded by a community that helped, encouraged and supported them during their academic career at the College. Citing three specific groups, Dr. Schwab acknowledged the Board of Trustees of the College; the faculty and staff; and friends and family.

Asking them to stand, Dr. Schwab first thanked the Trustees for their leadership over the years. "These men and women provide wise counsel and generous support that establish our strong foundation," he said while applauding. "Thank you."

The faculty and staff were also recognized by the President, saying that the educators continue to keep the highest academic standards, working collaboratively with students to create true scholarly excellence that brings fine recognition to the College, while the staff works throughout the year, often behind the scenes, working throughout the year to keep this institution functioning and beautiful," he continued.

But the group drawing the largest amount of applause was for the recognition of family and friends. "These are the family members that paid the student fees and drove the moving trucks," he said. "They are the friends who took the late-night calls, and those who have supported and encouraged you. Many of them are also alumni of the College. I think they need to stand and be recognized by all." It was at this time that more than half of those in attendance at the ceremony and applauded each other. 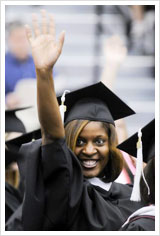 Three others in attendance were conferred with the College's highest degree—the honorary degree. The first was awarded to William G. Anderson, Chairman of the Board of Trustees.

Anderson graduated from Centenary in 1970, and was first appointed to the Board of Trustees in 1977, chaired the Great Teachers and Scholars Fund, and served on the Executive Committee as Treasurer and Vice-Chairman before becoming chairman in 1999. He was elected to the Alumni Hall of Fame in 2001. Anderson received an Honorary Doctorate of Laws.

"Now that you have an honorary degree from Centenary, Doctor Anderson, the folks at Anderson Oil and Gas will surely show you some new found respect," joked Dr. Schwab. "William Anderson has been a true blessing to me and to this College: he's a man of exemplary integrity, commitment, and generosity."

Also receiving special recognition, The Reverend Larry Stafford, minister of the First United Methodist Church of Monroe, received an honorary Doctor of Divinity. "We are certainly proud to welcome a man of such spiritual strength and ministerial talent as a part of the Centenary family," commented Schwab.

Frank Deford, veteran journalist and veteran journalist and commentator for numerous national publications and television programs, and commencement speaker, received an honorary Doctor of Humane Letters. "With this degree from this Centenary and his other degree from that other Centenary in New Jersey, Dr. Deford perhaps becomes the only person alive to hold honorary degrees from the two Centenary's simultaneously," added Schwab.

Before the conferring of degrees, Dr. Schwab and Dr. Darrel Colson, Provost and Dean of the College, recognized three special individuals. Dr. Mary Barrett, Professor of Geology, retired after more than 18 years at Centenary and was honored as Professor Emerita of Geology. "Thank you for your devotion to the discipline of geology, to your students, and to this College," said Dr. Schwab.

Also receiving special recognition was Dr. Victoria LeFevers. Lefevers retired after serving 26 years and was awarded Professor Emerita of Health and Exercise Science. "Many of us in this room have been on the receiving end of the genuine regard she has for others," said Schwab. "Just in my time here at Centenary, I've seen her throw herself into helping the Katrina victims here in town; I've seen her marshal the efforts of her students to adopt and serve charitable causes every holiday season; and I've seen her champion the cause of a deceased student. She has demonstrated a consistent commitment to the individual needs of each student she has taught."

The next honoree was Dr. Earl Labor, Wilson Professor of American Literature. Having been at the College since 1955, Labor left the College only twice; once to earn his Ph.D. at the University of Wisconsin in 1959 and again to serve as an administrator at Adrian College from 1962-66. According to the citation read, he has been honored and awarded by the best in the teaching profession: The American Philosophical Society, the Fulbright Committee, the National Endowment for the Humanities, the College English Association, the Louisiana Endowment for the Humanities, Phi Beta Kappa, Omicron Delta Kappa, and others. He is also known as the definitive authority on author Jack London. For his accomplishments to the College and to the scholarly community, Labor was awarded the title of Professor Emeritus of English.

"Centenary is honored to have had you on the faculty for so long," said Schwab. "We have made many memories together in Scotland, but also at your home here over breakfast gatherings with your world-famous gruel! You have helped shape the College, not least by establishing the significant Jack London archives here at Centenary and displaying the London bust that our students decorate seasonally. We are delighted you will continue to teach your London course and develop the archives. Thank you for your 54 years on this campus."

A Leader Steps Down

Finally, Dr. Schwab was recognized for his 18 years as the leader of the institution and awarded the honor of President Emeritus. After conferring the degrees on the graduates, Schwab took the opportunity to share some brief thoughts about his time at the College. He light-heartedly joked about convocations, weekends, homecomings and commencements as well as board meetings, basketball games and breakfast meetings.

But more importantly, he thanked those responsible for making the College successful, the faculty, staff, Trustees, students and alumni. "We have dedicated new buildings, increased the endowment, strengthened the faculty, and graduated many Ladies and Gents who now serve this world with wisdom and grace," he said. "I know—more assuredly now than ever—that the success of a college like Centenary depends not so much on the person in the presidency but on all of you. You all are the foundation of this college, and Centenary depends upon you. Thank you for making my job such a delight."

"Now, as I lay down the mantle of the presidency, I look forward to remaining a part of the faculty as a professor. When I entered college administration long ago, I always dreamed of one day returning to the classroom and ending my career there. It will be an honor to teach alongside these fine folks and to remain a part of Centenary for years to come. I look forward to seeing what the future holds for this fine college."

"I count it a privilege to have served the faculty, staff, Board, and, most of all, the students and alumni of Centenary College these past 18 years. As our alma mater says, "my heart will love thee ever." Thank you for making me a part of this community."