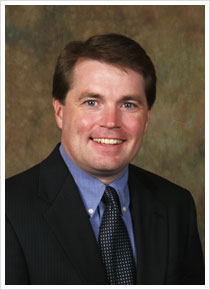 Rowe has served for the past nine years as the Vice President for Advancement at LaGrange College in LaGrange, Ga. He will officially take office August 1 and will succeed Dr. Ken Schwab, who announced his retirement earlier this year.

"The Board of Trustees and I are excited that Dr. Rowe will be assuming leadership at Centenary College," said William Anderson, Chairman of the Board of Trustees. "David brings substantial experience in institutional advancement as well a deep passion for higher education and expanding opportunities for the college and our students. We are very fortunate to have someone with his background in college development, experience and vision to assist the College in continued success and progress."

Rowe, who will turn 44 in June, is a Texas native and ordained United Methodist minister who has distinguished himself in higher education circles.

His reputation as a strategic thinker and visionary, a leader in matters related to sustainability—including work as an organizer of the Methodist Global Ethics Initiative—and as an accomplished fundraiser were attractive to the search committee. He has led LaGrange in its $65 million Defining Moment comprehensive campaign, which is on the verge of completion and featured the construction of a new 45,000 square-foot library.

"I am humbled by my selection as Centenary's next leader," Rowe said. "The institution's academic reputation, prestige among its peers and church connectedness are the envy of many."

"Now, I look forward to working with the Centenary community to imagine and write the next great chapter in the college's story."

"David's background as a strategic thinker and visionary, engaging public speaker, gifted United Methodist clergyperson, accomplished fundraiser and incisive leader in matters related to sustainability proved to be very attractive to the search committee, which pursued him for this opportunity," said Gulley.

Rowe received his undergraduate degree in chemistry from Southwestern University in Georgetown, Texas, his Master of Divinity from Emory University and his Ph.D. in higher education from Georgia State University.

Prior to assuming his current position at LaGrange College, he held administrative posts at Wesleyan College (Ga.), Oxford College of Emory University and Candler School of Theology at Emory.

He and his wife, Jodi, have two sons, Carter and Philip.