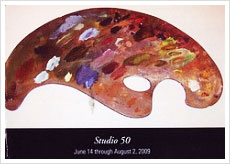 SHREVEPORT, La.— The Meadows Museum of Art will house two temporary exhibits this summer that will include extraordinary works of photography, as well as a diverse collection of paintings and sculpture when the Museum presents Focus Gallery: Kate Sartor Hilburn and Studio 50 beginning June 14 through Aug. 2.

Kate Sartor Hilburn will present her latest works, "Pentimento," photographic images based on the renovation of the metro station Champs Elysees-Clemenceau in Paris France during the summer of 2005. The newly exposed walls revealed layer-upon-layer of posters, signage, graffiti and conduit wires. The layers had patinated from years of exposure into a collage whose elements spanned more than a half-century of styles, concerns and images. Pasted-over layers, water damage, time and markings - both deliberate and random - were the plaster and pigment that created the fresco.

Hilburn documented, what at the time, seemed like a larger-than life collage to her, with her camera. The exhibition is a series of images, according to Hilburn, excavated from beneath the streets of Paris, created by time and the city itself.

A Louisiana native, Kate Sartor Hilburn lived in Virginia and Texas before returning to her home state in 1994. She has a BA in Studio Art from Mary Washington College and an MFA in Photography from Texas Woman's University. Exhibited nationally and published internationally, she is represented by the Cole Pratt Gallery in New Orleans. She is married to Wiley Wilson Hilburn Jr., a prominent journalist who writes a weekly column for the Shreveport Times and Monroe News Star.

A second exhibit located in the Pierremont Common Shopping Center, Studio 50, an eclectic exhibit of diverse paintings and sculpture, will also be on display beginning June 14 at the museum. More than 40 works will be displayed from Camille Hirsch's art class showcase the creative ability of each student.

Hirsch has been teaching art since 1962 and conducting private lessons since 1976. She has always been around art her entire life, beginning when she would run errands and "fetch" things for her father, who was also a local artist. In art, she explained, you have the opportunity to loose yourself in creativity and have the freedom to explore it."

"It was a wonderful lifestyle," she added. "One of the best things about teaching others is the joy you experience watching your students progress."