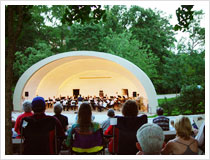 SHREVEPORT, La. — Looking for something to do during these long, hot summer nights in Shreveport? Centenary College has the perfect suggestion...attend the final summer band concert at the Hargrove Memorial Amphitheatre, Tuesday, June 30 beginning at 8 p.m. The concert is free and open to the public.

Since the performance is outside, concertgoers are encouraged to bring seat cushions, lawn chairs, and bug spray as well as a picnic basket and water.

The concert series ends on July Fourth when the band will take part in the Independence Day Festival event on the Shreveport River front. The event is sponsored by KTBS television with the band taking the stage at approximately 8:30 p.m. at Riverfront Plaza.

Information about individual concerts is as follows: