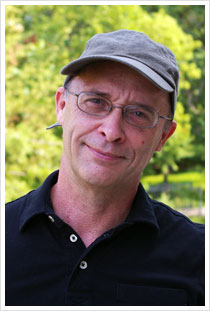 SHREVEPORT, La.—Professor of French, Dr. Dana Kress will be featured on the long-standing PBS television program "History Detectives" June 29 when he helps the investigators date an old Creole manuscript sent to them from a viewer in Chicago.

The hour-long program airs locally on LPB beginning at 8 p.m. with Dr. Kress featured on the third segment.

History Detectives is devoted to exploring the complexities of historical mysteries, searching out the facts, myths and conundrums that connect local folklore, family legends and interesting objects. Traditional investigative techniques, modern technologies, and plenty of legwork are the tools the History Detectives team of experts uses to give new - and sometimes shocking - insights into our national history.

A sought after expert in his field, Dr. Dana Kress is often asked to date or translate old Creole manuscripts and is the driving force behind Centenary's, Le Tintamarre, the only student-published French language newspaper in the United States.

According to the History Detectives web site, a fan from Chicago unearthed a French manuscript rolled in a cardboard tube. The surname "Duplessis," the name of his great-grandmother's mother-in-law, was jotted in a margin and "Rouzan," his grandmother's maiden name, appeared at the bottom of another page. No one in the family knew anything about it, but the contributor, who reads a little French, thinks he has found a collection of love poems, possibly written to one of his relatives. Adding to the mystery, they believe the manuscript could be more than 160 years old.

History Detective Gwen Wright, a Columbia University professor interviewed Dr. Kress for the French-themed episode back in December in New Orleans, and spoke to him about the manuscript, which could be the earliest body of work written by Creoles of color and published in the United States.

Producers of the program were intrigued by the manuscript submitted and the larger story of Creole culture in antebellum New Orleans.

Investigators had been researching the document for some time when the show contacted Dr. Kress, but it was his expertise that helped push the investigation forward. The manuscript, consisting of some 70 pages, contains works by French poets that Dr. Kress identified as Creoles of color. History Detectives thought the poems might predate Les Cenelles (published by Les Éditions Tintamarre) and thus become the oldest known pieces by Creoles of color issued in America.

So just how old is the manuscript and what importance does it play in the Creole culture? Tune in Monday, June 29 on LPB at 8 p.m. and watch the History Detectives solve another mystery, this time with the help of Centenary's own Dr. Dana Kress.

To read one of the poems and translation, click HERE. To watch the PBS program, click HERE.