Education in the Shreveport-Bossier City area is on the dawn of a new era, but barriers at the local and state levels could stifle the potential for improvement, new local education leaders said. 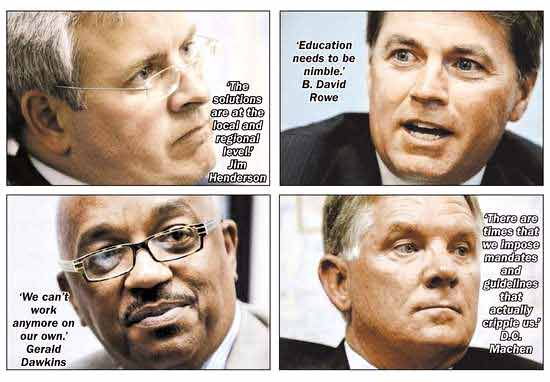 They all have vast experiences in education from working with the state's technical and community colleges to more than 30 years in the same local school system. All four leaders, however, are relatively new to their positions — ranging from a few weeks to about one year on the job.

These leaders stopped by The Times recently to talk about the future of education in northwest Louisiana and their role in its improvement.

They all say it's an interesting time for education in the area. With a statewide focus on education and economic development, northwest Louisiana can be the model for the rest of the state.

They also say the dynamics are interesting — two large school districts and four universities and colleges, one of which was named one of the best colleges in the nation. But the barriers that keep education in the area from reaching the next level — funding woes, misconceptions about accountability standards and lack of resources — are an everyday battle. And solutions won't come from the state capital, the leaders say.

"The solutions are at the local and regional level," Henderson said.

There are barriers to improving education. Among them is a misconception about Louisiana education, Machen said. Comparing Louisiana to other states doesn't paint an accurate picture, he said. Other things need to be part of the picture, including the number of students living in poverty and the state's accountability system, which is tougher than the federal No Child Left Behind law, Machen said.

"I would not say that the Louisiana system is behind in comparison to any other state. There are times that we impose mandates and guidelines that actually cripple us."

Dawkins sees as a barrier the lack of early education for some students. Not every child comes to the classroom with the same resources, he said, and that can make a difference.

"Now, basic skills have expanded beyond writing and reading. It's all of our core subjects as well as some exposure that some of these youngsters won't get."

On the higher education side, less state money and shrinking endowments are barriers. During the past year, state allotments for public colleges and universities have decreased.

At Centenary, the private Shreveport school's endowment had shrunk 21 percent by the end of last year. While private colleges and universities have endowments, budgets for public colleges consist of other revenue sources such as state funds. Private colleges are not funded by the state and rely more on endowment money. Centenary's endowment is about 30 percent of its budget.

"One thing that a tighter budget causes you to do is to determine clearly what your priority, purpose and mission is," Rowe said. "When the economy rebounds and those budgets become roomy, it will come in and provide resources behind those purposes."

Although money from the stimulus package helped cushion some of the blow, BPCC cut $1.75 million from its budget this year.

"If you look at (the local) educational infrastructure, we're well aligned," Henderson said. "But ... when you have dire budget situations, the tendency is to make across-the-board cuts. The state knows what's important in terms of rhetoric, but to go from rhetoric to the state appropriations bill is the challenge."

Those barriers have been an albatross on local education. Despite the challenges, the leaders say, the future is bright and solutions will come with collaboration and taking local ownership of students' education.

"Education needs to be nimble; it needs to be quick, responsive and be able to adopt new ways of communicating, collaborating and sharing resources," Rowe said. "Whether it's Baton Rouge or conservative traditions of a system that has been in place for a long time, you can think of immediately three or four challenges to moving quickly and nimbly and being able to adapt and barriers to sharing resources and collaboration and that can be dispiriting. Think it's up to us to lift that vision high and that possibility high not only for us, for our students, but our institutions."

Collaboration is a solution to lift some of those barriers, Machen said. Dawkins agrees that collaboration and tough decisions will raise student achievement. Some collaborative efforts include dual enrollment classes for high school students, and teaching internships or jobs for college students pursuing alternative certification.

Funding carries a lot of weight in the state, Henderson said. That can aid in a solution to removing the barriers when the money is used for innovation.

"If we keep funding the same behaviors and the same tired systems that haven't gotten us where we need to go, then we're never going to get any place."

But the solutions will come locally, Henderson added. Once those in the capital see the local solutions and collaboration, one barrier would be overcome.