MLP Kicks Off Season With "Never the Sinner" Sept. 25 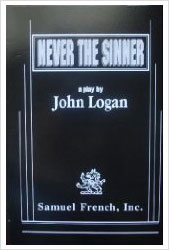 Ticket prices for adults are $10; seniors, military and students are $7. Admission is free for the Centenary community.

In what seems to be ripped from the headlines of today, Never the Sinner is the true story of the complex relationship of Leopold and Loeb that lead to the murder of a fourteen year old boy "for the thrill of it." Their deed and the sensational trial that followed enthralled a nation in 1924 has inspired playwrights, screenwriters and authors to pen plays, movies, musicals and books all examining the psyche of two boys that had so much promise but hardly any as well received as Never the Sinner.

Never the Sinner depicts the story of Leopold and Loeb - two young millionaire boys who in 1924, while attending university of Chicago, murdered a fourteen-year-old boy simply for the "thrill of it." This cinematic play chronicles the dark, deranged yet hauntingly tender world of Leopold and Loeb's relationship against the media's sensational coverage of what was then, "the trial of the century." A trial which is now equally famous for Clarence Darrow's legendary defense of the boys in the face of city-wide cries for execution.