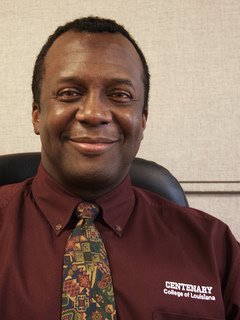 SHREVEPORT, La.— In a final tribute to a man that touched the lives of many on the Centenary College campus, President B. David Rowe today conferred the title of Vice President and Dean of Student Life upon David L. Womack posthumously.

The posthumous accolade was awarded during a gathering of family, friends and community members following a memorial service celebrating the life of Dean Womack who died suddenly on Saturday, August 29.

Reading from a letter written to the family, Dr. Rowe acknowledged the impact Dean Womack had in the short year he was at the College. "Because of his year of exceptional service, his legacy will be long-lasting," said Rowe.

"In recognition of Dean Womack's many contributions to this community, it is my honor to confer upon him the title of Vice President and Dean for Student Life. This posthumous accolade shall be retroactive to August 1, 2009."

According to research conducted by archivist Chris Brown, and Dr. Lee Morgan, author of Centenary College of Louisiana 1825-2000: The Biography of an American Academy, Womack already holds the distinction of being the first African American to serve at the senior level of leadership for the institution. And, according to Dr. Rowe, the ground-breaking frontiersman now also will be known as the first African American Vice President of Centenary College.

"Please accept and convey to all of David's family this community's deep gratitude for sharing him with us for this brief, but transformational, time in the history of Centenary College of Louisiana," added Dr. Rowe.

Womack held the position of Dean of Students and had been at Centenary since September 2008. He is survived by his wife Elizabeth Henning, and his four children, Donovan, Tyler, Mason and Landon.