SHREVEPORT, La.—He has traveled the world entertaining crowds around the country and around the world with his teammates. Soon he will be traveling with only one of those teammates and together take part in one of the greatest road trips of their lives.

Herb Lang, a 1998 graduate of Centenary College and member of the Harlem Globetrotters, and fellow teammate Nathaniel Lofton will compete against 11 other teams on the CBS program, The Amazing Race 15.

Lang attended and played basketball at Centenary College, graduating in 1998 with a degree in health sciences and physical education. The oldest of nine children, he went on to star at Centenary College, where he was a first-team all-conference selection and a conference scoring champ. During his senior year at Centenary, he won the National Association of Basketball Coaches (NABC) Slam Dunk Contest. Shortly thereafter, he was invited to the Harlem Globetrotters training camp in 1999 and will soon begin his 11th year with the team.

According to the teammates, their athletic talent brought the two friends together five years ago when they met at the Harlem Globetrotters training camp. While getting to know each other, Lang and Lofton discovered that their occupation and need to entertain others were not the only things they had in common. They both live in Louisiana, have two children and shared the same college basketball coach.

Recently, they lost one of their best friends and teammate, Chris Richardson, who passed away in December — and both continue to struggle with that loss. The three were commonly referred to as the "three amigos" throughout their inner circle. 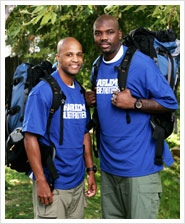 Lang believes he can get along with anyone on the planet and that he brings joy and laughter to all corners of the globe. Standing at 6'3," he is known among his colleagues as "Flight Time." Lofton, who goes by the name "The Big Easy," towers over the competition at 6'9," and admits to being worried that seating could present a problem on some of the flights.

Even if their fancy footwork does not translate to winning the $ 1 million prize, they both are confident that their relationship will remain the same regardless of where they end up in the Race.