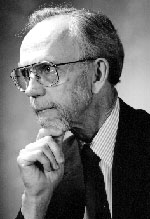 Born November 29, 1921, Alston graduated high school at the age of 15. At Centenary he was a member of the choir and majored in music performance (piano), before serving in the military during the Second World War. During the War, Alston fell in love with philosophy and taught himself as much about it as he could, enough that he was admitted to graduate study in Philosophy at the University of Chicago without ever having taken a philosophy course.

His publications include several anthologies; Philosophy of Language; more than 100 and fifty journal articles, many anthologized; 18 articles in the Encyclopedia of Philosophy; and numerous reviews. Two collections of his essays have been published by Cornell University Press: Epistemic Justification: Essays in Epistemology and Divine Nature and Human Language: Essays in Philosophical Theology. His most recent books are Perceiving God: A Study in the Epistemology of Religious Experience, The Reliability of Sense Perception, A Realist Conception of Truth, and Illocutionary Acts and Sentence Meaning.