SHREVEPORT, La.— With two different film series, the Centenary Film Society kicks off its 26th year of bringing the best in international, independent, and classic cinema to the Centenary and Shreveport community.

This year, the film society will feature two different series including "Classic American cinema from the Great Depression era," and a "French film series" which will be shown in French with English subtitles.

The film series runs now through December 2 with films showing Tuesday nights at the Robinson Film Center in the second-floor screening room, and Thursday nights on the Centenary campus in Jackson Hall, room 304. All screenings begin at 7:30 p.m. and are free to the public. Jefferson Hendricks, Professor of English and Film Studies at Centenary, will introduce the films on Tuesday nights, with Anna Medica, President of the Centenary Film Society, introducing the films on Thursday nights.

For more information, contact Jeffrey Hendricks at email, Anna Medica at email or Becky Palmer, Administrative Assistant for the Humanities, at 318.869.5254. 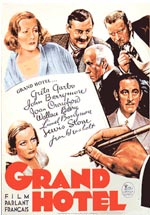 Based on Vicki Baum's popular novel and produced by MGM's "boy wonder" Irving Thalberg, this classic film is about the lavish Grand Hotel in Berlin, a place where "nothing ever happens." That statement proves to be false, however, as this opulent romantic drama follows an intertwining cast of characters over the course of two tumultuous days. This MGM blockbuster established for the first time ever the idea of the multistar movie. Even today the film crackles with wit, temperament, and vitality, all stemming from the studio's then-finest talent, including Greta Garbo, an internationally famous ballerina; John Barrymore, an impoverished baron who schemes to steal

Garbo's jewels; Joan Crawford, the ambitious stenographer; Lionel Barrymore, the dying man on a last fling, and Wallace Beery, the ruthless industrialist, all crossing each others' path in this Art Deco slice-of-life produced in the MGM grand manner. 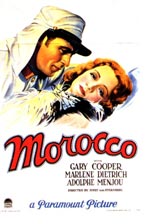 Marlene Dietrich's first American film is an atmospheric tale of love during wartime, exquisitely directed by Josef von Sternberg. Amy Jolly (Dietrich), a German singer, arrives in North Africa and is hired as the lead act in a cabaret frequented by members of the French Foreign Legion. Pursued by Le Bessier (Adolphe Menjou), a worldly gentleman, she finds herself attracted to handsome Legionnaire Tom Brown (Gary Cooper), who ultimately tests the strength of her love. Like many of Sternberg's most memorable films, Morocco is an intelligently observed, passionately realized story of sexual obsession, slim on plot but heavy on atmosphere. 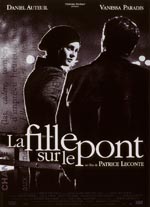 A suicidal girl who believes she was born luckless and a washed-up knife thrower meet on a bridge over the Seine in Paris and discover their shared destiny. At its best Director Patrice LeConte's (Monsieur Hire, The Hairdresser's Husband, and Ridicule) fairy tale romance has a dreamy, fabulous quality that's surprisingly charming, given how thoroughly contrived it is. The-girl-on-the-bridge Adele (Vanessa Paradis) is a young woman who has drifted through a life of aimless, passive promiscuity ("I believe every promise I hear") that has led her to the brink of suicide. Standing on a chilly Paris bridge, she meets Gabor (Daniel Auteuil), a profane, philosophical knife thrower out recruiting new talent. After saving her life, he persuades her to risk it, and they set out to conquer the cabarets and casinos of Europe with their act. 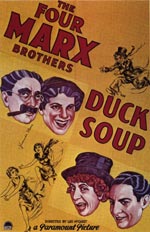 The Marx Brothers go to war in this inspired, lunatic blend of slapstick, satire, songs and surrealism. Duck Soup was a commercial flop when first released, but is now considered their masterpiece, and one of Hollywood's classic comedies.. The story concerns a dowager millionairess (Margaret Dumont) who will donate $20 million to the destitute duchy of Freedonia if it will agree to make Rufus T. Firefly (Groucho) its dictator. One of the best, and funniest, film depictions of the absurdities of war, the Marxes' depiction of two-bit dictators destroying their own countries was a slap at the rising fascists during the 1930s, so much so that Mussolini considered it a direct insult and banned the film in Italy. 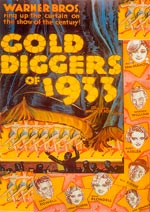 A classic 1930s musical, Gold Diggers of 1933 is centered on the adventures of out-of-work showgirls Carol, Polly, and Trixie, played respectively by Joan Blondell, Ruby Keeler, and Aline MacMahon. All three hope for a job on a new musical about the depression but soon find out that the supposed producer is himself broke. But young singer-composer Brad Roberts (Dick Powell) offers to foot the bill—provided that Polly plays the lead. This film offers some of Busby Berkeley's most spectacular choreography. The opening scene features Ginger Rogers singing "We're in the Money" dressed only in silver dollars—a dream come true in depression-era America. Other spectacular dance sequences include roller-skating policemen and a midget dressed as a baby in "Petting in the Park," stunning overhead footage of chorus girls in "The Shadow Waltz," and the dark, moody "Remember My Forgotten Man," which presents the fate of jobless WWI veterans. 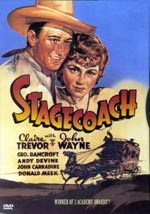 Regarded by many as the best Western ever made, Stagecoach shot John Wayne to stardom and elevated the prestige of a genre that had hitherto been considered a B-movie province. With rumors in the air of a possible Apache attack, a motley group of travelers in a small New Mexico town board the Overland Stage bound for Lordsburg. Among them are the pregnant Lucy Mallory (Louise Platt); timid liquor salesman Peacock (Donald Meek); Hatfield, an aloof gambler (John Carradine); Gatewood (Berton Churchill), a pompous, embezzling banker; and two who have been exiled from town, alcoholic Doc Boone (Thomas Mitchell) and Dallas (Clair Trevor), a lady of the evening. Along the trail, they pick up the Ringo Kid (John Wayne), an outlaw who's escaped from prison to take revenge on the Plummer brothers for destroying his family and framing him for murder. As their journey progresses, the hypocrisy of the supposedly respectable passengers becomes clear, and it's the tainted outsiders who display courage and humanity. 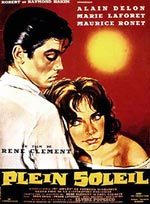 Cast: Alain Delon, Marie Laforet, Maurice Ronet, Bill Kearns. 118 minutes. in French and Italian w/English subtitles.
René Clément's psychological thriller Purple Noon is a chilling examination of decadence and madness amidst beautiful people in beautiful places. Sent to Italy to retrieve Philip, an American industrialist's wayward son, Tom Ripley (Delon), a charming young man whose social skills allow him to insinuate himself into most any situation, finds his target and gets seduced by Philip and his decadent lifestyle. Deciding to take Philip's father's money as far as it will go, Tom begins to make himself a part of Philip's circle of privileged friends in Europe. However, when Tom's money is cut off and Philip begins to tire of his company, Tom resorts to desperate measures to retain his new lifestyle. An acclaimed adaptation of Patricia Highsmith's 1955 novel The Talented Mr. Ripley; later adapted by British director Anthony Minghella in 1999 starring Matt Damon and Gwyneth Paltrow. 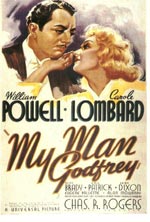 Cast: William Powell, Carole Lombard, Gail Patrick, Eugene Pallette. 90 minutes. Nominated for six Academy Awards.
My Man Godfrey is one of the most popular screwball comedies of the 1930s. On a scavenger hunt for a society ball, haughty Cornelia Bullock (Patrick) discovers Godfrey (Powell), a dirty, disheveled bum lurking around the city dump. She's looking for a "forgotten man" and Godfrey fits the bill perfectly. Hoping to win her first prize, she offers him five dollars to come along with her. Proud and dignified, he refuses, casting her aside. Minutes later, when her lovely younger sister Irene makes the same request, an enamored Godfrey accepts. The hunt sets off an unusual chain of events that bring Godfrey into the Bullock household as a permanent fixture. He'll become deeply embroiled in their family saga before anyone learns his true identity. 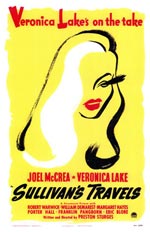 Cast: Joel McCrea, Veronica Lake, William Demarest, Franklin Pangborn. 90 minutes. Selected for the National Film Registry, 1990.
This brilliant, often devastating look at Hollywood and the real world behind its tinsel is arguably Preston Sturges's greatest film. Joel McCrea, in one of his best roles, plays a successful Hollywood film director who has made nothing but lightweight films with titles like "So Long, Sarong." When he is suddenly struck with the desire to make a searing drama about human suffering in the midst of the Great Depression, his studio bosses laugh in his face, since McCrea has no personal experience of such difficulty. Accordingly, McCrea dons hobo clothes and, with only 10 cents in his pocket, goes forth to experience adversity for himself. 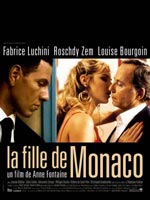 Cast: Fabrice Luchini, Roschdy Zem, Louise Bourgoin, Stephane Audran. 105 minutes. in French w/English subtitles.
The Girl from Monaco begins as easygoing farce before shifting into a more ominous and serious mood. A famous Parisian attorney (Fabrice Luchini) has traveled to Monaco to defend a woman accused of murder — a crime of passion quite outside the lawyer's own tightly contained emotional sphere. Reluctantly, the lawyer spends every waking minute shadowed by a bodyguard-for-hire (Roschdy Zem), whose ex-lover, a sunny, carnally aggressive TV weathercaster (Louise Bourgoin), latches onto the lawyer. Almost instantly the legal eagle's life becomes a sexual blur and the resulting story treads a fine line between playing for laughs and playing for keeps.