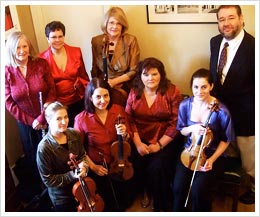 SHREVEPORT, La.— The Baroque Artists of Shreveport will perform the first concert of the season Sunday, October 4 beginning at 3 p.m. in the Anderson Auditorium, located on the Centenary College campus. The concert is free and open to the public.

The first of four concerts, the group will perform the music of Vivaldi, Handel, Telemann and J.S. Bach, all of whom are undoubtedly the biggest names in Baroque composition.

Upcoming concerts are: Nov. 22 at St. Mark's Episcopal Cathedral; January 31 at Anderson Auditorium, and March 14 at St. Mark's. All concerts begin at 3:00pm.

The BAS consists of professional musicians in Shreveport and has been performing for the past 25 years. Those performing on this concert are: Sally Horak, flute; Theresa Zale Bridges, oboe; Jennifer Carsillo and Angela Russell, violin; Adrienne Gabriel, viola; Ruth Drummond, cello; Christopher Allen, bass; and Donald Smith, harpsichord.