Enrollment Numbers On The Rise 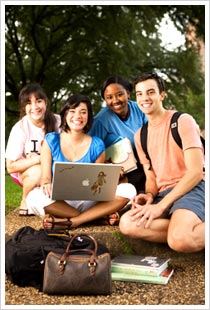 SHREVEPORT, La.—The figures are in and with an enrollment of 887 students, Centenary College of Louisiana opened the doors to it largest student body since 2006. Part of this success is due to its incoming first-year class—one of the largest, most diverse and most prepared to enroll at the College.

Official enrollment calculations indicate a student headcount of 887 students, nearly a six percent increase from last year at this time.

The numbers also show Centenary has one of the largest freshman classes with 278 students, an increase of 13 percent more than enrolled during the 2008-09 academic year.

The incoming class is also more diverse, with minority students representing 26 percent of the class, making it one of the biggest percentages of entering minorities in the College's history.

"This is one of the most diverse, well-rounded and academically prepared first-year classes in recent history," said Tim Crowley, Dean of Admissions. "We are very happy with the academic quality of our students. While we are pleased with the academic qualities of this class, we are equally impressed with the dedication to community service and leadership these students demonstrated in high school."

Louisiana residents make up the largest portion of the incoming class at 63 percent with the remaining students representing 17 states, including Texas, Arkansas, Vermont, Virginia, California, Colorado and Florida. The class is also joined by international students from Canada, Mexico and New Zealand.

"Students know that Centenary is delivering on the promises we make to students when they enroll here," Crowley continued. "They also realize the effectiveness of the Centenary Experience in transforming their lives in an ever-changing world."