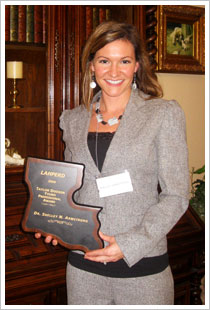 SHREVEPORT, La. — A professor in the Department of Health and Exercise Science at Centenary College of Louisiana has been honored by the Louisiana Association for Health, Physical Education, Recreation and Dance (LAHPERD).

Shelley Armstrong, Ph.D., received the Taylor Dodson Young Professional Award at LAHPERD's annual convention, held in Baton Rouge, November 5. The award is given to a professional under the age of 40 who works in the areas of health, physical education, recreation and dance; and has made significant contributions in research, professional organizations, professional literature, and outstanding community service.

Armstrong is currently an assistant professor and Acting Chair of Centenary College's Department of Health and Exercise Science. She is an advisor, internship coordinator, holds the Broyles Research Chair, and serves on Academic Policy and NCATE committees at Centenary. She is also a certified secondary health & physical education teacher and a certified national collegiate athletic association (NCAA) Division I coach. She has been the head coach of both the men's and women's Cross Country teams since 2004.

Before teaching in higher education, Armstrong was a clinical research associate in cancer prevention and control at the Louisiana State University Health Sciences Center in Shreveport. She has produced numerous publications in scholarly journals such as the Journal of American College Health, Gastroenterology Nursing, and the LAHPERD Journal. Armstrong presents at local, state and national conventions including AAHPERD, LAHPERD, the National Girls and Women in Sport ceremony, and the American Heart Association's "Go Red for Women" event.

Armstrong was also cited for her accomplishments as the Race Director and originator of the annual Centenary College "Healthy Kids' Fun Run" and "YOUth FIT", a summer running program for children operated by the Shreveport Parks and Recreation organization. She is an avid runner, completing the Houston Marathon in the top five percent of all runners and the top two percent of all female runners.

Armstrong has received several other awards including being named as one Shreveport's "40 Under 40" award honoree which recognizes "Northwest Louisiana's most successful young professionals for outstanding achievements and community involvement" by City Life Magazine and the Shreveport Chamber of Commerce.

The Louisiana Association for Health, Physical Education, Recreation and Dance was founded in 1934 with the goal to improve the quality of life through health and fitness and recreational activities. LAHPERD is an affiliate of the American Alliance for Health, Physical Education, Recreation and Dance. The members of LAHPERD include teachers, administrators, dance instructors, recreation supervisors, fitness directors, college students, allied health specialists, exercise physiologists, athletic trainers, and represent 64 parishes and 24 universities and colleges around the state.