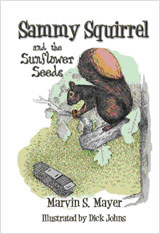 SHREVEPORT, La.—A book-signing event will take place at the Meadows Museum of Art Sunday, Dec. 6 from 2 until 3:30 p.m. for the book, Sammy Squirrel and the Sunflower Seeds.

Written by Tyler, Texas native, Marvin S. Mayer, it is the story of Sammy the squirrel's adventures after being captured and relocated to the Squirrel Relocation Center, and his courageous attempt to return home while his father searches for him at the same time.

Mayer began writing children's books after his retirement in April, 2007 from a lengthy career in banking and finance and now pursues his passion for writing. Although well beyond his teens, he is still a kid at heart. Mayer relates to youngsters, so much so that he decided to write stories just for children. To make sure he did it right, Mayer went back to school, to the Institute for Children's Literature.

"As a child, I didn't learn to enjoy the wondrous world of books," said Mayer. "I hope readers of this page won't make that same mistake. Now, as a result of my involvement with writers' groups, my outlook has changed. I think I have read (and enjoyed!) more children's books in the last year than I had read in all my years as a child. Kids Books by Marvin is just what its name implies; books for children - from preschoolers to preteens. They exist for one reason and one reason only —- entertainment!"

In conjunction with the book signing, the Meadow's Museum of Art's Education Through Art program is inviting students from around the area to share in this event by showcasing their artwork. Contact Mandy Perdue, Meadows Museum of Art Museum Educator, at: 841-7271 for more information on how to participate in the event.

For more information on this event or the events taking place at the Meadows Museum of Art, call 318.869.5040 or visit www.centenary.edu/meadows.