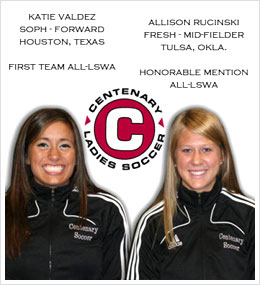 HAMMOND, La.— Sophomore Katie Valdez and freshman Allison Rucinksi were among Louisiana's elite to be recognized by the Louisiana Sports Writers Association when they announced the 2009 All-Louisiana Collegiate Women's Soccer Teams.

Valdez was named to the LSWA First Team after leading the Ladies to an 11-6 mark on the season. The Houston native, led the Ladies in all offensive categories, notching career-bests in goals (10), assists (9) and points (29) to earn First Team All-Summit League. She was a dominant force among league leaders, topping the league in shots (90), shots per game (5.00), points per game (1.61), assists (9), and assists per game (0.50). She also finished second in points (29) and third in goals (10) and goals per game (0.56). This season, Valdez had two matches, where she finished with two goals (UT-Brownsville & Southern Utah) and one where she tallied a goal and an assist, which proved to be the game winner (IPFW).

Rucinksi was among the 15 student-athletes representing seven different state institutions who earned All-Louisiana honorable mention honors. Rucinski scored four of her five season goals in the first four games of the season. She tallied one assist against Letourneau after scoring her first collegiate goal. She led Centenary in game winning goals with three and was tied for second on the team with goals (5) and third in points (11) as a true freshman. She also recorded the best SOG percentage (.684) on the team.