SHREVEPORT, LA — Centenary College in partnership with the Van Thyn Lecture Series will commemorate the sixty-seventh anniversary of the Auschwitz Concentration Camp liberation Friday, January 27. The all-day event will honor the memory of local survivors Dr. Rose and Louis Van Thyn and feature a continuous screening of their video testimonies on their struggles during the Holocaust. The screening is free and open to the public and visitors may stop in throughout the day. 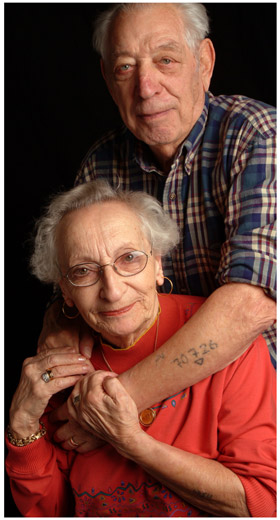 "Sadly, we will soon be in a world without any living Holocaust survivors to teach us about the dangers of hatred and intolerance," said Dr. Lisa Nicoletti, Professor of Art and Visual Culture. "Collections such as this one are vital to Holocaust remembrance and education. For the last decade, Dr. Rose with Louis by her side, regularly spoke on our campus about life before, during, and after the Holocaust. We miss them terribly."

This showing marks the introduction of Centenary College as the first Shoah Foundation Visual History Collection in the state of Louisiana. The College will provide the public with free future access to these testimonies, which will be housed in Magale Library. The testimonies are from the archives of the University of Southern California Shoah Foundation Institute for Visual History and Education.

Steven Speilberg created the Survivors of the Shoah Visual History Foundation in 1994 when he was inspired by his experience making Schindler's List. The Institute aims to overcome prejudice, intolerance, and bigotry—and the suffering they cause—through the educational use of the Institute's visual history testimonies that it gathers from survivors and other witnesses of the Holocaust.

This presentation is made possible by the Van Thyn lecture series in honor of Rose and Louis Van Thyn, Holocaust survivors who dedicated themselves to retelling their stories so that people would not forget or repeat those horrors. For her extraordinary community service, Mrs. Van Thyn was awarded the honorary Doctor of Humane Letters at Centenary's 2002 commencement exercises. She literally talked to thousands of local schoolchildren during her life about the horrors of the Jewish genocide before her death in 2010 at the age of 88.

In order to preserve her and her husband's legacy, friends of Mrs. Van Thyn established the Rose and Louis Van Thyn Board of Regents Endowed Professorship Program in November 2009. Through the professorship, the College provides education opportunities to its students and to the surrounding community, with a goal of teaching the history of the Holocaust, and how to recognize signs of intolerance and provide a means for preventing prejudice and hatred.