"Our new staff members are adding their unique talents and energy to an already strong Centenary family," said Scott Rawles, Vice President for Advancement. "We have no doubt that their contributions will help us move forward in transforming lives for the transformation of the world." 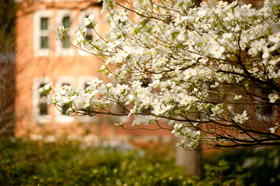 Josh Hernandez brings over eight years of experience in advancement to his position of Philanthropy Officer. Hernandez has worked in annual giving, corporate and foundation relations, and advancement services. He earned both a B.A in English and an M.A in English Composition and Rhetoric from North Dakota State University.

John "JR" Ramsey '10 joins the Marketing & Communication Office as the new Social Media Specialist. An alumnus of Centenary, Ramsey graduated with a B.A. in New Media Communication. Prior to joining Centenary, JR worked as a media specialist for Asbury United Methodist Church and spent a year teaching English at Caddo Middle Magnet.

Building upon ten years of experience in media relations, Margo Shideler '03 has re-joined her alma mater as the Director of Strategic Communication. Prior to her return, she honed her skills working for a member of the U.S. House of Representatives and at global communication consultancy, APCO Worldwide. She most recently served as Director of Marketing & Communication for the Community Foundation of North Louisiana. Shideler graduated from Centenary with a B.A. in Political Science and a B.A. in French before obtaining an M.A. in International Affairs from The George Washington University.

With a background in sales, fundraising, nonprofit work, and politics, Leighton Wilson has joined Centenary as Philanthropy Officer. Wilson's previous experience includes working as the Executive Director to the Adera Foundation and as Deputy Finance Director for the Paul Carmouche Congress campaign. After earning a Bachelor of Business Administration and M.A. in Communication Studies from Baylor University, Wilson obtained a M.S. in Fundraising from New York University.

Having spent nearly 25 years successfully running media companies and groups of media companies, Ron Lamar is uniquely qualified to be Centenary College's Director of Community Services. Most recently, he served as the COO of Moon River Ranch, a luxury ranch resort in Central Texas that hosts family reunions, corporate retreats, and weddings. Ron is a graduate of the University of Texas at Austin with a B.A. in Anthropology and a B.S. in Advertising.

Kristi Kohl joins Centenary as the Electronic Resources/Reference/Web Librarian. Kohl earned her bachelor's degree in Psychology from Berry College and her master's degree in Library and Information Science from Louisiana State University in 2010. Before coming to Centenary, Kohl served as the solo librarian for Remington College.