SHREVEPORT, LA — The Greater Shreveport Music Teachers Association (GSMTA) and Centenary College are sponsoring a recital on March 16 and a master class on March 17 presented by Neil Rutman. 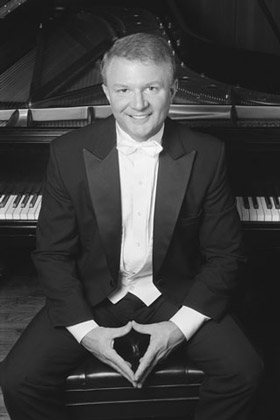 "We are very excited to have Neil Rutman on campus," said Joy Ratcliff, Lecturer in Music and Director of the Piano Preparatory Program at Centenary College. Ratcliff also serves as the Vice-President in charge of programs for GSMTA. "Mr. Rutman is a distinguished performer and teacher whose unique approach to tone production offers a special aesthetic experience for all music lovers in Shreveport."

Neil Rutman is a graduate of the Eastman School and Peabody Conservatory. He is currently serving as the Artist-in-Residence at the University of Central Arkansas. With performances that are "both commanding and full of character" according to the New York Times, Rutman has appeared in venues ranging from Carnegie Hall to the Schola Cantorum in Paris. He has won several international competitions and received awards from the National Endowment for the Arts as well as the Astral Foundation. His recordings include two Mozart Piano Concerti, a Poulnec CD, and a 2008 Chopin release on the Pro Musica label.

A pre-concert talk will precede the performance:

* Rutman's Chopin CD and Poulenc CD (the latter featuring the late Tony Randall narrating Babar the Elephant) will be on sale in the lobby during intermission.

GSMTA seeks to unite the teachers of music in Shreveport and the surrounding areas to protect their interests, improve teaching methods, encourage participation in the MTNA and LMTA Certification programs, develop higher degrees of musical education and culture in the community, and broaden social relationships among the members.