Andress to speak at Founders' Day 2012

SHREVEPORT, LA — Dr. Will K. Andress '61, Director Emeritus of the Centenary Choir, is set to give the Founders' Day Convocation address February 9 in Brown Memorial Chapel at 11:00 a.m. The focus of Dr. Andress's talk is "Opening a Fifty-Year-Old Time Capsule." Members of the Shreveport-Bossier and Centenary community are invited to attend this free event. 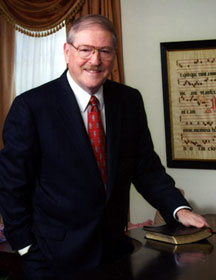 "I'm not sure I've ever known another person with his remarkable set of gifts," said Dr. David Hobson, current Director of the Centenary College Choir. "I think his creative and entrepreneurial spirit, energetic pacing, and passion for expanding the horizons of Centenary Choir students set him apart. The Centenary Choir became 'America's Singing Ambassadors' because of his creative vision for meaningful opportunities on a global scale. And he was so much more than a mere director figure to us! Hundreds of alumni attest to a common perception of Will: counselor, mentor, friend, role model, and so on."

Dr. Andress began his Centenary College career as a tenor soloist under the direction of Dr. A. C. "Cheesy" Voran. After graduating from Centenary in 1961, Will moved his family throughout the South while furthering his education and working as minister in music at local churches. He earned a graduate degree in church music from the Southern Baptist Theological Seminary, Louisville, KY, a Masters in Music from East Carolina University, and a Doctor of Music from Florida State University.

In 1974, he was appointed Director of the Centenary College Choir. During his 33 years as Director, Andress made his mark upon the Choir organizing and directing choir concerts in 30 countries on six continents, performing for many foreign heads of state and four U.S. Presidents.
Upon his retirement in 2007, Centenary named Dr. Andress "Director Emeritus" of the Choir, and he was inducted into Centenary's Alumni Hall of Fame. By proclamation of the Louisiana Senate and House, he was also recognized for a lifetime of commitment and service to the State of Louisiana.

After serving 40 years as Minister of Music of the First United Methodist Church in Shreveport, Dr. Andress retired in 2011 to serve as the Church's Director of Fine Arts.

Founders' Day Convocation is an annual tradition during which the Centenary community reflects upon the history of the institution — and looks forward to its future.

Dr. Mike Hemphill at Founders' Day: "What Are We Making Here?"