SHREVEPORT, LA — The Frost School of Business will hold a special convocation for its series "An Entrepreneur's Journey" on Tuesday, February 7. Tony Simmons, President and Chief Operating Officer (COO) of the McIlhenny Company, will be the featured guest speaker. The convocation is free and open to the public. 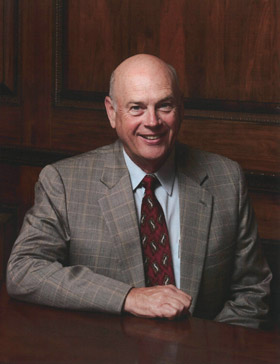 "Tony's story and that of the McIlhenny Company highlight the significant role that an entrepreneurial culture and mindset play in the success of any organization," said Dr. Chris Martin, Dean of the Frost School of Business. "This mindset was certainly required when Edmund E. McIlhenny started selling his pepper sauce over 140 years ago. Today, entrepreneurial thinking is just as critical as the Company continues to grow its product line, expand internationally, partner with other companies, and grow the TABASCO® brand."

As President and COO, Simmons is the fifth generation to be involved in management of the family business. Located on Avery Island, the McIlhenny Company was founded in the mid- to late-1860s by Tony's great-great-grandfather, Edmund McIlhenny, the inventor of TABASCO® Pepper Sauce. He grew his first commercial pepper crop in 1868. Over 140 years later, TABASCO® Sauce is made much the same way except now the aging process for the mash is longer — up to three years in white oak barrels — and the vinegar is high-quality distilled vinegar.

Labeled in 22 languages and dialects, sold in over 160 countries and territories, added to soldiers' rations, and put on restaurant tables around the globe, McIlhenny TABASCO® is the most famous, most preferred pepper sauce in the world. The McIlhenny Company is now in its seventh generation of shareholders, and all of the 183 shareholders are family members.

Simmons will also be the keynote speaker at a dinner for the Center for Family-Owned Business later that evening.

This Frost School of Business special convocation series is designed to inspire entrepreneurial-minded, innovative thinking among Centenary students and foster an understanding of how ideas can become opportunities for business success.