SHREVEPORT, LA — Centenary College has officially entered into an innovative partnership, called Louisiana Escadrille, with the University of Rennes, France. President David Rowe joined Dr. William Arceneaux, president of the Council for the Development of French in Louisiana (CODOFIL), and representatives of the Centenary Education Department and the Consulate General of France from New Orleans for the signing of the agreement. 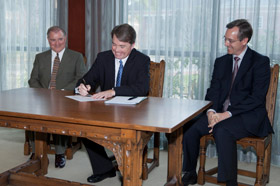 Official signing of the agreement

"This partnership highlights our commitment to creating engaged global leaders," said Scott Rawles, Vice President for Advancement. "Louisiana Escadrille is expanding opportunities for our students and enriching the Centenary experience. Our students are not only making global connections but also returning home to make a difference locally."

In coordination with CODOFIL, the partnership is designed to send Louisiana teachers-in-training to France for preparation to become French teachers in Louisiana schools. Completing coursework through both Centenary and the University of Rennes, France, students ultimately obtain a Master of Arts in Teaching (M.A.T.) from Centenary. Upon graduating, Louisiana Escadrille participants commit to teaching in an immersion program for at least three years.

Current Escadrille students have been in France since August, teaching twelve hours per week, observing native French teachers, and studying pedagogy at the University of Rennes. Prior to their departure, students completed a three-week session on Centenary's campus.

M.A.T. student Nicole Horne has been maintaining a travel blog, sponsored by NOLA Française, while in Rennes. Written in French and English, the blog acts as an interactive learning tool for French immersion schools and classrooms in Louisiana.