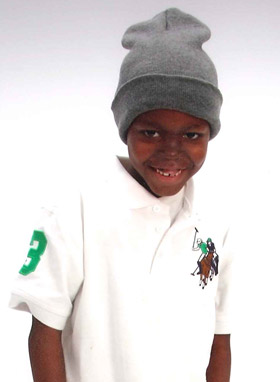 Sir Terrence Mack was diagnosed almost two years ago with Natural Killer T-cell Lymphoma. Previously an avid basketball player who loved to be outdoors, he now has to spend most of his time inside and has little energy to play. Unfortunately, chemotherapy and radiation treatment cannot continue, and Sir Terrence's next option for treatment is to receive a bone marrow transplant.

"He wants to go back to school and do things with his brothers. He just wants to have a normal life again," said Sir Terrence's mother, Wadell Hayes.

Sir Terrence has attended several Centenary basketball games and served as honorary team captain, sitting on the bench with the team throughout the game. The team decided to use its Senior Day doubleheader on Saturday to encourage as many fans as possible to sign up for the national registry. Finding a donor match is crucial to saving the life of Sir Terrence Mack, though currently, no donor match has been found.

"Our players have taken to Sir Terrence over the last year, and they are excited about being able to host an event like this for him — we are really hoping to raise awareness for the need for bone marrow donors by working with LifeShare," said Centenary Men's Basketball Head Coach Adam Walsh. "Sir Terrence deserves a chance to continue to fight his Lymphoma, and we hope that we can find him a match on Saturday."

Individuals who sign up for the national registry will be given free admission to the Centenary basketball doubleheader Saturday. The registry will take place in the lower level of the Gold Dome, Saturday, February 11 from 11:00am until 3:30pm. Signing up requires only five minutes, minimal paperwork, and a cheek swab — no blood is drawn. Those interested in participating need only tell the box office they are there for the registry and will be given free admission and further instructions.

As an affiliate of the National Marrow Donor Program through a partnership with the Gulf Coast Bone Marrow Program, LifeShare recruits and registers individuals for the national marrow registry and conducts confirmatory testing on those who have been identified as potential donors. Every day 10,000 patients in the U.S. search the Marrow Registry. More information about the National Marrow Donor Program can be found at: www.BeTheMatch.org.

LifeShare Blood Centers regularly supplies blood components to 117 medical facilities throughout Louisiana, East Texas and Southwest Arkansas. Founded in Shreveport, La. in 1942, it is a nonprofit community service provider governed by a volunteer Board of Trustees.