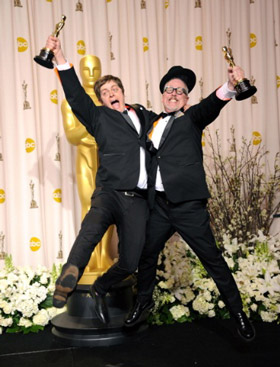 "The entire Centenary family is excited about Joyce's win as it brings national attention to our community," said Matt Bailey, senior director of external relations. "We are especially proud of our students and alumni who have devoted their time and talents to Moonbot Studios and the region's creative industry in general."

Moonbot Studios has also produced the iPad application for "The Fantastic Flying Books of Mr. Morris Lessmore." The app has already won numerous awards in its own right. Centenary alumni Nolan Baker '10 from Moonbot Studios and senior Jacob Jennings from Twin Engines Lab assisted in the app's programming and development.

A second story app, "The Numberlys," was released from Moonbot Studios in January 2012. The app presents an innovative depiction of the origins of the alphabet. Nolan Baker and junior mathematics major Jackson Blankstein, who is interning at MoonBot, took part in the production of the "Numberlys" app.

Since affiliating with Centenary, Joyce has supported the educational goals of the College by sharing his time and talents with staff and students. He has given lectures, in-house demonstrations, office tours, employment opportunities, and internships as his production schedule allows.

Hailed by Newsweek as one of the top 100 people to watch in the new millennium, William Joyce has produced a slew of classics beloved by both children and adults. He has won three Emmys for his Disney animated series, "William Joyce's Role Polie Olie." His illustrations and paintings are displayed at museums and art galleries nationwide.

Founded in 2010, Moonbot Studios is an animation and storytelling company based in Shreveport, LA. Moonbot Studios was co-founded by artists and filmmakers William Joyce and Brandon Oldenburg and veteran film producer Lampton Enochs.