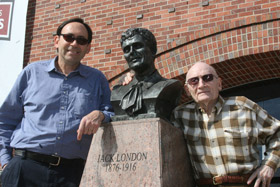 "Years ago, I met Jack London's youngest daughter and quickly realized that no one had ever done a documentary on him," said Million. "The more I looked into it, the more I got interested in London's writings and the broad array of topics that he wrote on. He's fascinating because there are so many contradictions in his life, and you can't just pigeonhole him as a writer."

Dr. Labor gave the history of each item as Million made his way through Centenary's vast Jack London collection. The Jack London Research Center is working toward becoming the world's largest repository for secondary materials: critical and biographical works related to Jack London. Preserving London's legacy remains of vital importance as California prepares to permanently shut down the Jack London State Park by July 2012.

Million's stop at Centenary was one of many in his quest for information. He previously visited Huntington Library, a repository for the largest collection of London papers, and the Jack London State Historic Park, which was once part of the writer's home.

Through the lens of London's adventuresome life, autobiographical writing, and voluminous correspondence, Jack London: Twentieth-Century Man will explore the relationship between literature, philosophy and biology in the Progressive Era and the subsequent evolution of racial, social, and cultural attitudes in the early Twentieth Century.

As the world's leading London scholar, Dr. Earle Labor, Emeritus Professor of American Literature and Director of the Jack London Research Center, was honored this past spring as the Jack London Man of the Year 2011 by the Jack London Foundation. Dr. Labor has published eight books and nearly one hundred articles on the great American author. His authorized biography, Jack London: An American Life in Letters, is scheduled for release in 2012 by Farrar, Straus & Giroux, Publishers.