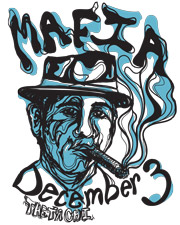 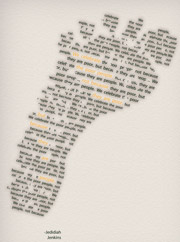 "We Celebrate the Poor" — Krista McKinney

"It is gratifying to be recognized among such a talented group of advertising industry professionals whom I genuinely admire," said Hawkins.

She won three gold ADDY Awards through her independent design company, BlueJay Creative, in the brochure, broadcast/electronic, and collateral categories. Hawkins also received a special recognition of "Best Logo Design" for one of her entries. Her collateral piece that won gold was the Node living-learning community poster that she designed to attract students for the inaugural run in fall 2012. The three designs will now proceed to the district finals. Winners of the district finals proceed to the national finals.

"I think I am more excited about my students' awards than I am about my own," said Hawkins. "It takes a lot of courage to put your work out there for critique by creative professionals. With just a semester of design experience under their belts, Charles and Krista submitted work that stacked up against the work of students from other universities who have had years of design classes."

Madden won a student bronze ADDY for his collateral piece, "Mafia." The design was created for an annual Theta Chi theme party, Mafia, and to complete a class assignment. In the process, Charles learned how to use a tablet and properly balance a design. Madden is a junior Studio Art and Chemistry major.

"I definitely see graphic design as a valuable skill that I am glad to have," said Madden. "Going to the ADDYs was interesting because it showed me that there is a lot to improve on, and I would definitely like to work more on design."

McKinney, also a junior, received a student silver ADDY for her collateral piece, "We Celebrate the Poor" print. Her piece was based on words she found scribbled on a notebook page while attending an Invisible Children's Fourth Estate conference in August 2011. Krista is a Communications (Film/TV/Video) and Studio Art major.

"My design inspiration came from a quote, 'We celebrate the poor people, not because they are poor but because they are people,'" said McKinney. "This was my first design project ever, so I learned from the ground-up under Professor Hawkins."

Since 1937, the American Advertising Federation of Shreveport-Bossier (AAFSB) has been dedicated to serving its members by promoting, protecting, and advancing the broad interests of advertising. The ADDY Awards Competition is the industry's largest and most representative competition for creative excellence.