SHREVEPORT, LA — The Hurley School of Music will host a guest recital by Paul Christopher and Ruth Drummond on Sunday, March 18, at 3:00 p.m. in Anderson Auditorium. They will present cello duo works by Jacques Offenbach. The event is free and open to the public. 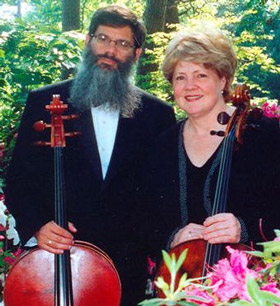 Paul Christopher, assistant professor of Music Theory and Cello at Northwestern State University, has published in the Jacques Offenbach Society Newsletter, Strings, Bass World, and peer-reviewed journal American String Teacher. He has given presentations at Louisiana Music Teacher Association conventions and served as Chair of their String Committee. In August 2007, the Music Teachers National Association recognized Christopher as a Nationally Certified Teacher of Music in Cello.

He received his bachelor of music education from the New England Conservatory of Music and his master of music in cello performance from the University of Memphis.

Ruth Drummond, principal cellist of the Shreveport Symphony Orchestra and Shreveport Opera, is a soloist and chamber musician. She is the cellist in the Evangeline Piano Trio, the West Edge String Quartet and a longtime member of the Baroque Artists of Shreveport playing cello, baroque cello, and viola da gamba.

Drummond's summer activities include principal cellist of the Shreveport Summer Music Festival and Opera East Texas. Drummond has studied at the Baroque Performance Institute at Oberlin Conservatory and performed in Upper Peninsula Michigan with the Superior Music Festival and Chamber Players.

In 2004, Drummond and Christopher released "The Gift of Melody," duos for two cellos by Jacques Offenbach, on the Human Metronome label. Three additional discs of Offenbach cello duos, "The Perfect Gift," "The Master's Gift," and "The Artist's Gift" have followed.