SHREVEPORT, LA — The Theatre Department recently presented their fall production of The Glory of Living at a regional competition for the Kennedy Center/American College Theatre Festival. The production was only one of six invited to the competition. 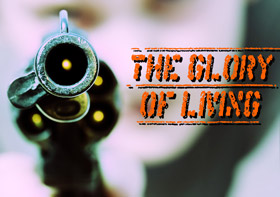 "We were competing against some of the top training programs in the nation, and we absolutely held our own," said Emily Heugatter, assistant professor of acting and directing. "Our show was an audience favorite of the week, and we heard nothing but positive comments from students, faculty, and committee members all week long."

The group was awarded the coveted Golden Handtruck Award, which is given to the cast and crew who have the best load in and load out procedures and technical rehearsals. Eleven Centenary students are featured in the cast, and 13 students are on the production crew. The Glory of Living is directed by Emily Heugatter and designed by Don Hooper, both faculty members.

"Winning the Golden Handtruck was a tremendous honor," said theatre major Andrew Wood. "The award doesn't just mean that you worked quickly and efficiently, but that you were the most enthusiastic, polite, and you worked as a team. It was proof that we represented Centenary proudly and professionally."

Senior theatre major Chelsea David won a national-level award for Distinguished Performance by an Actress. The title was selected from entries of college productions from all 50 states.

"I was completely in awe," said David. "I never imagined that my performance would have been recognized at that level. This award really helped concrete my desire to act and be part of the arts. I could not have done any of it without our wonderful director, cast, and tech crew."

Written by Rebecca Gilman, The Glory of Living is a gritty, visceral production that follows Lisa Needham as she is hurled from one disheveled motel to the next, leaving a trail of crime and confusion behind her.