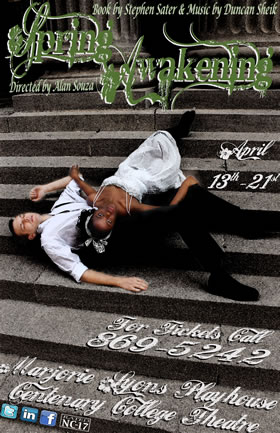 Set in provincial Germany in the 1890s, this production melds indie-rock music from Grammy-nominated musician Duncan Sheik with the ageless struggles of teenagers.

Teenagers explore sexuality, challenge the status quo, and use the knowledge that elders have given them to expose the harsh reality behind their parents' social facade. While fearlessly tackling these contentious issues, the musical score beautifully sweeps the audience through the wide gamut of emotions each of these characters is experiencing for the first time.

Spring Awakening is directed and choreographed by award-winning freelance director Alan Souza with musical direction by Centenary alumnus Costas Dafnis. Souza has acting and directing credits both on and off-Broadway as well as regionally with plays and musicals for the Walnut Street Theatre, The New Theatre, Virginia Musical Theatre, The Human Race Theatre, Arkansas Repertory Theatre, and the Texas Shakespeare Festival.

This production has been rated NC-17 due to language and graphic sexual content. Audience members must be 17 or older to attend this performance, unless accompanied by a parent.

Reservations can be made at any time by leaving a message with the box office at 318.869.5242, or more information can be found online.