SHREVEPORT, LA — Centenary hosted the 2012 Leadership Banquet, Wednesday, April 18, honoring those who have given their time and talent to the work of the College.

"Sometimes a mere thank you is not enough to show our appreciation to those who willingly commit their leadership and resources to the College," said Scott Rawles, Vice President for Advancement. "We are deeply grateful for those trustee members, past and present, who continue to move the College forward." 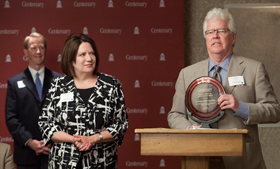 After an invocation and dinner, President David Rowe and Edward J. Crawford, Chairman of the Board of Trustees, recognized retiring or departed board of trustee members. Trustee members Dr. Nancy M. Carruth H'82, Jay Greenleaf '84, and George R. Schurman '57 were memorialized. Student leader Drew Burnham '12 and faculty representative Dr. Cynthia Brame were recognized as their terms as ex-officio members end. The group also thanked Charles Walter Dobie '54 for his service and commitment to Centenary as he resigns his membership on the Board.

The evening concluded with the inaugural presentation of the George D. Nelson, Sr., Lifetime Service Award. The Lifetime Service Award is named for George Dalman Nelson, Sr. (1974-2004), who was a cheerful and willing servant to his community and state. Nelson served 30 years as Chairman of the Centenary Board of Trustees, the longest tenure of any Chairman.

The Award was created to recognize others for their volunteer service to Centenary. The inaugural recipient and honoree was Virginia Kilpatrick Shehee '43, H'02, whose service and commitment as an alumna, friend of the College, and Board of Trustee member have enriched Centenary for over 70 years.

The recipient of the George D. Nelson, Sr., Lifetime Service Award is selected from nominations presented to the President and approved by the nominating committee of the Board of Trustees.