SHREVEPORT, LA — Dr. Earle Labor, Centenary Professor Emeritus of English, was recognized for his many contributions to the world of weightlifting during the 2012 USA Weightlifting National University Championships, April 13-15. Professor Kyle Pierce, Founding Director of the USA Weightlifting Development Center at LSU-S, introduced Dr. Labor who then presented awards to the medal winners of the competition. 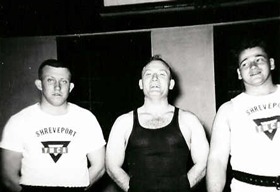 Though best know for his research on Jack London, Dr. Labor has an extensive history in the world of weightlifting. In 1947, as an undergraduate at Southern Methodist University, he inaugurated the school's first weightlifting course. He coached and lifted the SMU team to victory in the 1948 Dallas Open Championships.

Prior to entering the U.S. Navy in 1952, Labor held the Texas AAU Light-Heavyweight title.

Upon his arrival at Centenary in 1955, he recruited Physical Education Instructor Gene Perkins and sophomore Joel Sermons to represent the Shreveport YMCA. The three lifters, joined by heavyweight John Foster, competed successfully at meets throughout the Ark-La-Tex area the following year.

Labor continued lifting while pursuing his doctorate at the University of Wisconsin. He was a consistent medalist in the Wisconsin State Championships until retiring from active competition in 1959, when he returned to Centenary as an Assistant Professor of English.