SHREVEPORT, LA — Lieutenant General John Spencer Hardy '38, who had a meaningful and lifelong connection to Centenary, passed away in Baton Rouge on Tuesday, May 1. Born in Logansport in 1913, he would have celebrated his 99th birthday on May 7. 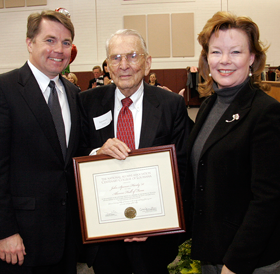 Hardy attended Centenary as a non-traditional student while he was stationed at Barksdale Air Force Base in Bossier City. He was a career officer in the U.S. Army Air Force from 1935 until 1970. In 1942, he served with the Eighth Air Force in England and was named Chief of Operations in 1943. His military decorations include Army and Air Force Distinguished Service Medals, Legion of Merit with two oak leaf clusters, Belgian Croix de Guerre with Palm, Royal Hellenic Order of King George I, and Commander with Merit of The Order of the Italian Republic.

Well into his nineties, Hardy could be found at least three days a week in the Centenary Fitness Center. He and his wife, Norma Ann, were also regular attendees of special Centenary events. In 2010, he was inducted into the Alumni Hall of Fame for his many contributions and continued dedication to his alma mater.

The visitation will be at Rose Neath Funeral Home on Marshall Street on Thursday, May 3, from 5:00-7:00 p.m. The funeral will be held at First Baptist Church Shreveport in Frost Chapel on Friday, May 4, at 2:00 p.m. Dr. Donald Webb will be officiating the service. Lt. Gen. Hardy will be buried with full military honors at Arlington National Cemetery.