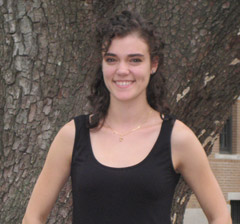 President Obama encouraged student leaders to contact Congress in support of extending the low interest rates currently in place and to use #DontDoubleMyRate on Twitter and Facebook. After his remarks, Cecilia Muñoz, Director of the White House Domestic Policy Council, took questions.

"I appreciate that President Obama is concerned about the students of this country and their families," said rising senior Alexandra Larsen. "I think it says a lot that he not only talked to us directly, but gave us the opportunity to ask questions that will directly affect us and our peers."

Hughes and Larsen took the call in the company of Shreveport Mayor Cedric Glover and three of his staff members and student body presidents from Bossier Parish Community College, Southern University, and Grambling University. Once the conference call concluded, the local student leaders discussed the policy and its implications with the mayor and his team.

Ninety percent of Centenary students receive financial aid, and the average amount of debt for the College's graduates is less than the national average.

Four years ago, Congress cut the interest rate from 6.8 percent to 3.4 percent on Stafford student loans, hoping to reduce the debt load for more than 7 million students who have the federally backed loan. Barring congressional action, the rates will revert to the prior level on July 1.