SHREVEPORT, LA — Centenary College will welcome Methodist delegates from across Louisiana June 3-6 in the Gold Dome for the 2012 Louisiana United Methodist Annual Conference. The four-day event will be the last annual conference session with Bishop William Hutchinson as the episcopal leader as he is set to retire in August 2012. Hutchinson will present his last episcopal address to the Louisiana United Methodist Conference Monday, June 4, at 4:30 p.m. 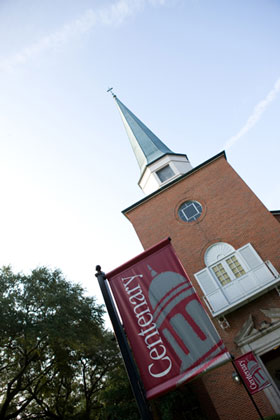 Inspired by Ephesian 4:11-12, the theme of this year's Conference session is "Building up Leaders for Building up the World." The conference and denominational focus is on developing principled leaders for the church. In light of this emphasis, Reverend Adam Hamilton, founding pastor of the United Methodist Church of the Resurrection in Kansas City, will lead sessions on Sunday evening and Monday morning with a discussion of "Leading Beyond the Walls."

A number of special services will be featured during the conference. Reverend Roger Lathan, pastor of Jefferson United Methodist Church in Baton Rouge, will preach the Memorial and Communion service on Monday night. The Service of Ordination and Commissioning will be held Tuesday evening with Bishop William Hutchinson serving as guest speaker. Dr. Marcia McFee, a graduate of Saint Paul School of Theology, will serve as the Conference's consultant and worship leader.

A special report prepared by the Strategic Vitality Task Force in cooperation with the Conference Council on Finance and Administration that addresses the Conference's future funding will be presented.

Special offerings taken at this year's Conference will help repair the First United Methodist Church in Ekaterinburg, Russia, and will assist recent ordinands in touring the Holy Land.

During the Conference, members will also reflect upon and celebrate Louisiana Skeeter Run: Change the World, a conference-wide event held April 21 focused on the elimination of malaria worldwide. Held in eight cities throughout Louisiana with over 2,000 participants, the Skeeter Run raised funds and awareness for Imagine No Malaria, an initiative of the United Methodist Church.