SHREVEPORT, LA — Centenary professors Kelly Weeks and Jeanne Hamming did not look far from home when planning the May Module, "Significant Otherness and our Inner Ape." The month-long course enabled the professors and Centenary students to observe chimpanzee social groups at Chimp Haven National Chimpanzee Sanctuary in Keithville, La., from May 7-25. 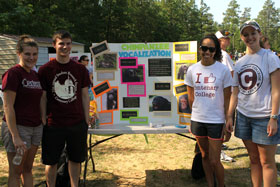 The module explored questions such as What is culture? and Do cultures exist among non-human animals? Students also examined key texts in cultural primatology and animal studies and applied that knowledge to their observations of the chimps.

"I learned that chimpanzees have culture," said rising senior Summaya Anwar, a double major in biology and business. "Their hoots and grunts all have meaning, but we are just ignorant of them. I learned how to make a food call, whimper, and pant grunt just like the chimps. The chimps are also capable of making tools, such as spears and wadges (a sponge made by chewing fibrous material). Chimps use sticks as tools to go termite fishing and they teach each other this behavior. One chimp, Rita, made a spear and killed a snake that was endangering a baby chimp."

As part of their module experience, the students provided enrichment materials to the chimps and recorded which items captured the most attention or interest of the social groups. Anwar observed the chimps taking interest in specific magazines and stuffed animals: 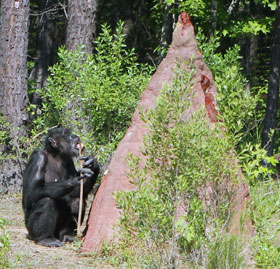 "Merv, a lower-ranking male chimp, likes Victoria Secret catalogues and the color pink. He used to be a pet for an elderly lady before he was brought to Chimp Haven and she seemed to have greatly influenced him. Another chimp, Violet, really likes SpongeBob, and we regularly saw her walking around with a stuffed SpongeBob on her back."

The students were able to share what they had learned and observed about the chimps through posters and informal discussions during Chimp Haven's Discovery Day on May 19. The event honored "Chimpanzee Heroes," and visitors were also able to learn about Ham and Enos, two chimpanzees who went up into space before humans.

May Module is a month-long set of immersive courses available in a variety of academic areas. By participating in a May Module, Centenary students fulfill their requirements for Trek, an innovative program through which all Centenary students participate in experiential learning by exploring opportunities in the areas of career, culture, and community.

Chimp Haven, located 22 miles southwest of Shreveport, is the permanent home to chimpanzees who have lived their lives in medical research, the entertainment industry, or as domestic pets.